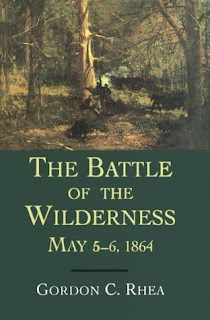 Like two titans, Ulysses S. Grant and Robert E. Lee locked armies and ferociously grappled with each other over two days in early-May 1864 in a dense forbidding patch of terrain and landscape in northern Virginia known as "The Wilderness".  At the conclusion of these two days of some of the most severest fighting of the entire Civil War, the two armies had lost a combined total of nearly 29,000 men killed, wounded, or captured.

Gordon Rhea's account of Grant's first battle as the Union Army Commander-in-Chief, is a well-written and very thorough description of The Battle of the Wilderness.  Grant was determined to maneuver the Union Army of the Potomac between Robert E. Lee's Army of Northern Virginia and the Confederate capitol in Richmond, and in The Wilderness he very nearly succeeded.  He started three extremely powerful Union Army Corps eastward down the Orange Plank Road and the Orange Turnpike and ran headlong into two Confederate Corps commanded by A.P. Hill and Dick Ewell.  Unfortunately for the Federals, as the fighting started the corps and brigade commanders just couldn't maintain effective coordination and communication as the assaults progressed, and the out-numbered Confederate corps were able to beat back most of the Federal attacks at great cost to both attacker and defender.

The woods were so dense and disorienting that the attacking troops couldn't see but just a few yards in any directions, and unit movements became fragmented and went off-track almost immediately.  The firing of muskets and artillery actually started numerous forest fires, which flared up among the troops as they moved through the woods, or lay wounded on the forest floor.  The fighting was pretty much a unconstrained brawl between the two armies and just raged back and forth and up and down the turnpike and plank roads.  Finally, after two days, the major fighting slowly sputtered out and the two armies were largely back in their original starting positions and just scowling at each other.

Rhea assesses the result of two days of battle in The Wilderness as, at best, a tactical victory for Lee and the Confederates, but a strategic victory for Grant and the Federal army.  The bottom-line was that Grant was not going to leave--not even after nearly 18,000 Federal casualties--but was going to latch onto Lee's army like a pitbull, and not let up up until the war was over.  This attitude for prosecution of the war was a sea-change compared to all of the previous commanders of the Union Army of the Potomac.  Grant, in The Wilderness, tried to exercise the use of power in attacking Lee's army, as he did so successfully in his campaigns in the western theater.  The problem was that his subordinate commanders (i.e., Meade, Hancock, Sedgewick, Burnside, et al.) and the Army of the Potomac just weren't up to the challenge yet.  Both Grant and the Army of the Potomac needed to learn how to fight differently and fight 'together', and this first step in The Wilderness was clearly part of that learning process.

I can't begin to relate how much I learned about Grant's leadership qualities and The Battle of the Wilderness in this excellent book by Gordon Rhea, and how much I am looking forward to reading the next three books in his series about the Overland Campaign.  The maps included in the book are truly quite superb and make much of the complicated maneuvering of the units during the battle much easier to follow and comprehend.  As usual, I wish there were even more maps, but that's a common litany of mine.  Every serious Civil War buff ought to have this book on their shelf.

Posted by Christopher at 2:17 PM