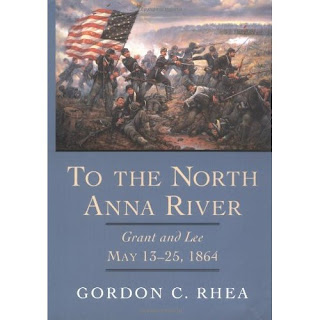 Like two dueling grandmasters, Lee and Grant sat down over the 'chess-board' of the northern Virginia landscape that separated Washington, D.C. from Richmond, Virginia.  For the first two weeks of May 1864, the two generals have been adroitly maneuvering their armies across the terrain and engaging in some of the most sustained, ferocious and horrific combat seen in the Civil War.  It is spring 1864, and the Northern population is wearying of the war, and Lincoln and his administration are up for reelection in November.  While the South may not be able to prevail any longer militarily on the battlefield, it is hoped that Lee can buy time for a political solution by conducting a careful and defensive campaign against Grant's much larger Army of the Potomac.

Rhea's third volume in his "Overland Campaign" series, To the North Anna River: Grant and Lee, May 13-25, 1864 is an incredibly fascinating story about the little-known period of time between the dreadfully bloody Battle of Spotsylvania Courthouse (see my review of Rhea's The Battles for Spotsylvania Court House and the Road to Yellow Tavern, May 7-12, 1864 below) and the impending slaughter at the Battle of Cold Harbor.  Following the bloodbath at Spotsylvania Court House, Grant gingerly disengages his army from his lines fronting Lee and deftly begins to sidle south and east around Lee's right flank.

Grant's short-term strategic goal is to turn Lee out of his earthworks at Spotsylvania Court House and hopefully engage him in battle on more open ground.  In fact, Grant even sends Hancock's Second Corps trundling off southward as 'bait' in an effort to draw Lee out.  Lee doesn't fall for Grant's trick though, and rapidly shunts his army 25 miles due south to the banks of the North Anna River and devises an ingenious system of defensive earthworks, and awaits the approaching federals with a trap of his own.

Close on the heels of Lee's army, Grant and the Army of the Potomac move up to the North Anna River, and thinking that the Confederates have continued to retreat toward Richmond, move across the North Anna at two separate crossings that are a couple of miles apart.  This has the effect of splitting the large Union army into two pieces separated by Lee's entrenched rebel army.  In essence, with his interior lines, Lee can now attack each wing of the federal army and defeat them in detail.

Fate and Chance always seem to have a way of intervening on the battlefield, and it is no different here.  Lee becomes very ill with dysentery and as he is bedridden he is really quite unable to aggressively lead the rebel army in these complicated maneuvers, and his subordinate command structure is unable to fill the void.  Simultaneously, Grant does come to realize the predicament he is in and immediately has his army entrench and protect itself.  With the opportunity to 'check-mate' one another now passed by, Grant is realistically left with just two options: (1) attack Lee's virtually impregnable position on the North Anna; or (2) disengage and sidle east or west of Lee's position and try and maneuver Lee out of his works toward Richmond.  He chooses the latter option and determines to sidle easterly, and the two grandmasters continue their game of maneuver and probing for defensive weaknesses.  In just a few days the two commanders and their armies will meet again on the field of battle near the tiny hamlet and road junction of Cold Harbor just nine miles from Richmond.

I really can't say enough about the quality of Rhea's writing and his ability to bring history alive.  Somehow his story-telling manages to impart a real feeling of 'you are there as an eyewitness' so very effectively.  While the decisions of the command structures of the two armies are certainly important to Rhea's narrative in the book, I think it is Rhea's attention to the stories of the common foot-soldiers, artillerymen, and cavalrymen that makes this book--and the entire series--so darned poignant and engaging.  These books illustrate and describe accounts of patriotism, courage and extraordinary feats of heroism--on both sides of this bloody conflict--that are such an important part of the overall saga of the history of our American republic.

Posted by Christopher at 3:07 PM