Review: "Gettysburg: A Testing of Courage" By Noah Andre Trudeau 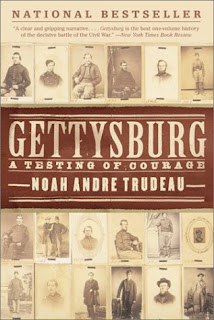 This was an amazing book, and ever-so-well written!  I have been to Gettysburg National Military Park several times over the course of my adult life, and I never fail but to be astounded at the overall importance of this battle and that the Union Army was able to ultimately prevail over the Confederate Army during this battle on July 1-3, 1863.  The other important element of this battle that Americans need to understand is the sheer ferocity with which this battle was fought between the two sides.  It really was blood-letting on an almost unimaginable scale with about 45,000 men--blue and grey--killed, wounded, or missing over the three days of battle in this quiet little Pennsylvanian town.

In 2002, former National Public Radio producer Noah Andre Trudeau published his own detailed account of this significant episode in American history, and it really is a solid winner.  With 65 superb maps in the book, this is virtually an hour-by-hour, or blow-by-blow account of the battle, and for much of the book leaves the reader almost breathless with anticipation as one turns the pages, as this battle really was a very near-run thing and could just as easily have turned to the favor of Lee's Army of Northern Virginia.

A lot of books (a bazillion, maybe?) have been written about this seminal battle of the American Civil War, and it is easy to see why.  The Battle of Gettysburg is generally considered to be the "High Tide of the Confederacy", and with Lee's loss at Gettysburg on July 1-3, and the Confederate surrender of Vicksburg to Grant's Army on July 4th, it really did become just a matter of time before the war would end in victory for Lincoln and the Union. I remember reading Edwin B. Coddington's The Gettysburg Campaign: A Study in Command many, many years ago, and while Coddington's analysis is truly superb, I think that most readers are likely to enjoy Trudeau's even more.  I've also yet to read Stephen Sears' one-volume account, Gettysburg, but have it on my 'Mount To-Be-Read' shelf waiting for me (I'm actually halfway through it now).  Finally, if you're interested in fictional accounts of the Battle of Gettysburg, I urge you to read Michael Shaara's The Killer Angels and the very recent novel, Cain at Gettysburg, by Ralph Peters (review posted, above).

If you're at all interested in the American Civil War, American history, or military strategy and tactics, I highly recommend Noah Andre Trudeau's book, Gettysburg: A Testing of Courage.  Finally, it is worth pointing out that the 150th anniversary of the Battle of Gettysburg is coming up next year--July 1-3, 2013.  This book would be worth reading between now and then and ponder the consequences; and if you've the time, take your family and go visit this hallowed ground.