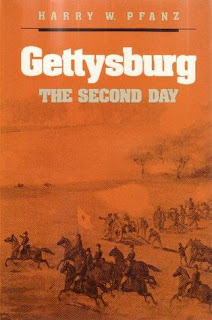 This is a superb tactical analysis of the fighting that occurred late in the day on July 2, 1863, on the federal left and the Confederate right at the Battle of Gettysburg.  Pfanz, a former historian for the National Park Service at Gettysburg National Military Park, describes this hellish several hours of vicious combat in great detail and down to the regimental and even company level.  Most of the fighting is focused on the area of the Federal line held by the Third Army Corps commanded by Major General Daniel Sickles.  Sickles had moved his Corps forward off of the stronger Cemetery Ridge line out to the Emmitsburg Road.  This brought most his brigades into the range of Confederate artillery batteries, and placed his men directly in the path of most of Confederate Lt. General Longstreet's Corps as it mounted a concerted attack on the Federal left.

While Pfanz describes the ferocious fighting at the extreme left of the Federal line at the Round Tops, and particularly the storied repulse of the Confederate attack at Little Round Top by Vincent's Brigade and the 20th Maine, most of the book focuses on the combat along the Emmitsburg Road, through the Peach Orchard and Wheatfield, and up Plum Run into the Devil's Den.  General Longstreet described this as some of the hardest several hours of fighting that he'd ever seen.  The Confederates certainly enjoyed early successes during the fighting on the second day, but the end result was that they, in effect, hammered the Federal forces back from their initially exposed positions and up into a position of greater defensive strength on Cemetery Ridge.  This would have disastrous consequences for Lee's Army of Northern Virginia the next day--July 3rd--when Lee ordered the massive charge against the Federal center (i.e., Pickett's and Pettigrew's Charge).

Pfanz is an engaging writer, and definitely brings a historian's scholarly perspective to bear in his book with loads of personal and eye-witness accounts backed up with nearly 100 pages of end-notes.  While the maps included in the text are very good, I have to say that I still found myself to be somewhat confused by all of the complex maneuvering between the Federal and Confederate units as the fighting raged back-and-forth across the southern end of the battlefield.  I found that utilizing Bradley Gottfried's sterling The Maps Of Gettysburg: An Atlas Of The Gettysburg Campaign, June 3--July 13, 1863 really enhanced my understanding of the combat that occurred on this section of the battlefield.  If you're interested in more fully understanding this pivotal battle of the American Civil War, I strongly urge readers to seek out and read the detailed battlefield tactical monographs by both Harry Pfanz and David G. Martin.  Pfanz has written three volumes that cover the Battle of Gettysburg (i.e., The First Day, The Second Day, and Culp's Hill and Cemetery Hill).  Martin's Gettysburg, July 1 is truly excellent and is reviewed below.

Posted by Christopher at 1:20 PM