Review: "The Battles for Spotsylvania Court House and the Road to Yellow Tavern" By Gordon C. Rhea 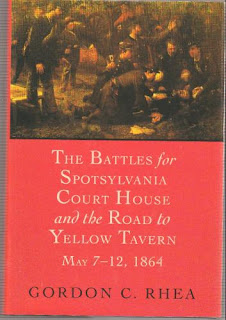 "Out of the frying pan, and into the fire"--Out of the butchery of The Wilderness, and into the horrific carnage of The Muleshoe and Bloody Angle of Spotsylvania--this is the second entry in Gordon Rhea's masterful series describing the Overland Campaign of Ulysses S. Grant and the Union Army of the Potomac against Robert E. Lee's Army of Northern Virgina in the spring and summer of 1864.  Following the inconclusive horror of two days of bloody fighting in the tangled forests of The Wilderness, Grant has sidled the Union Army to the southeast, hoping to turn Lee's right flank and put his army between the Confederates and their capital in Richmond, Virginia.  Unfortunately, for the federals and Grant, Lee's army beats him by a step to the tiny hamlet of Spotsylvania Court House, and there behind superbly constructed defensive works repels numerous assaults made by the larger Union Army of the Potomac over the next week.

It was with riveting horror that I read of each of the attacks made against the rebel fortifications in what became known as "The Muleshoe"--a large salient that jutted out from the center of Lee's lines.  The Muleshoe was nearly a half-mile in length and nearly as wide and was ably defended by Lee's Second Army Corps, commanded by Lt. General Dick Ewell.  By the end of May 12th, at the conclusion of major fighting on this section of the battlefield, nearly 18,000 men had been killed, wounded, or captured (8,000 rebel, and almost 10,000 federal).  It was carnage on a scale not seen before in the Civil War, and that the bulk of the fighting took place in the defensive earthworks ringing and within The Muleshoe, it portended the gruesome butchery that was to come in the trenches of the First World War just fifty years later.

Rhea is an excellent story-teller, and tells of these horrifying days and events through the use of the personal accounts (e.g., letters and diaries) of the officers and men that participated in the fighting.  It is my understanding that perhaps William D. Matter's If It Takes All Summer: The Battle of Spotsylvania is an even better account of the Spotsylvania Campaign--that may be so, as I've yet to read it--but Rhea's is a gripping "you are there" account that is a page-turner from the very first to the last.  The thirty maps that are included within the text are incredibly detailed, from both a strategic and tactical perspective, and perfectly complement Rhea's masterful prose and battle descriptions.

By the time one has finished this excellent book, one cannot help but completely agree with the conclusion reached in Rhea's epilogue--

"The Confederates were technically correct in considering May 10 and 12 as victories.  After all, they had foiled Grant's assaults on each occasion.  But a few more such victories would leave Lee's army in shambles.  Eight days of fighting Grant had gutted the Army of Northern Virginia's capacity to go on the offensive.  For the future, Lee had little choice but to continue his defensive tactics, hoping to thwart Grant's thrusts and to buy time for a political solution to the war."

If anything, I enjoyed this second volume in Rhea's four-volume series about the Overland Campaign of 1864 even more than the first, and now it is on to the third book, To the North Anna River: Grant and Lee, May 13-25, 1864.

Posted by Christopher at 2:54 PM