Review: "A Blaze of Glory" By Jeff Shaara 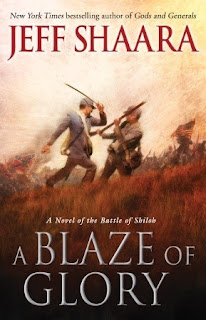 I read this novel a couple of weeks ago, and my verdict?  'Meh!'  I promptly sent it along to my mom and dad with a note that read, "A so-so novel about the Battle of Shiloh.  Keep it, or pass it along to someone else..."

This is the second novel by Jeff Shaara that I've read (the first being Gods and Generals) and it will surely be the last.  I have always been fascinated by Civil War battles and leaders, and especially with the Battle of Shiloh (April 6-7, 1862), Grant's first big action.  Over the years I have read several very well-done non-fictional accounts of the battle (e.g., Wiley Sword's book, Shelby Foote's account of the battle in his 3-volume narrative, etc.) and was excited to see this new fictional account of Shiloh at the bookstore.

Unfortunately, Shaara's writing is as flat as most of the characters in the novel.  Frankly, I thought his characterization of Confederate General Albert Sidney Johnston was maudlin, overly sentimental, and way too introspective.  He didn't do any better with Union General William Tecumseh Sherman either; as Sherman comes across as peevish and an almost complete imbecile (and he chain-smoked cigars like a fiend in the novel!).  Interestingly, to me, Shaara's characterization of the fictionalized enlisted men or officers from the various Union and Confederate units were, on the whole, done quite a bit better than his historical characters.  For example, I actually did grow to like the Rebel cavalry Lieutenant, James Seeley, and the Yankee, Fritz Bauer; and found myself flipping pages just to get back to their respective points-of-view.  Weird, huh?  Even the battle/combat descriptions just weren't all that engaging, at least for me.  In short, this book just never grabbed me, not one jot.  I tried, I really tried to like this book, but I didn't.

In rating this book, I would give the novel two stars out of five, and--in my humble opinion--I'm being very generous.  I debated whether to even post this review here as it really is that bad.  As I mentioned above, I've not even kept the book on my physical bookshelf at home.  Finally, I decided that I should just go ahead and write up and post my review.  Ultimately, maybe my observations and opinions associated with this book will be helpful to someone else.  Enough said.