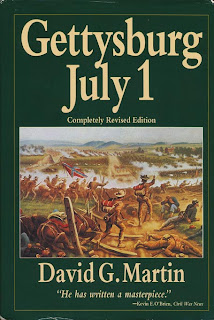 On July 1-3, 2013, it will have been 150 years--the sesquicentennial--since the largest and bloodiest land battle on the North American continent was fought at the little rural Pennsylvania town of Gettysburg.  As I have mentioned in previous posts, combined with the fall of Vicksburg, Mississippi to Grant's Federal forces (on July 4, 1863), the Confederate defeat at Gettysburg really was the turning point in the American Civil War.  In my opinion, it was now simply a matter of time before the Union would prevail and end the rebellion.

David Martin's Gettysburg, July 1 is a fascinating account of the fighting that occurred on the first day on the ridges and fields west and north of Gettysburg between elements of Confederate forces led by Corps commanders A.P. Powell and Richard Ewell and the Federal First and Eleventh Corps commanded by John Reynolds and Oliver Howard, as well as the two Federal cavalry brigades brilliantly managed by John Buford.

Typically, when the fighting at Gettysburg is discussed, the focus is always on the action at the extreme left of the Federal line at Little Round Top on the second day, or the horrific carnage associated with the Confederate charge upon the Federal center on the third day by Pickett's and Pettigrew's divisions.  Martin's account is solely focused on the fighting of July 1st, and the convergence of the two armies upon the field near Gettysburg.  This is the story of an uncommonly ferocious stand-up slug-fest that profoundly affected the final outcome of the battle.  It is also the story of command leadership that was both brilliant and inept, with heroism and courage exhibited time-and-again by the individual soldiers under some of the most harrowing circumstances.  The description of the fighting on McPherson and Seminary Ridges, both north and south of the Chambersburg Pike, involving the First Corps' First Division made up of Cutler's Brigade and the Iron Brigade was simply riveting.  Martin's use of numerous personal accounts of the combat made for very compelling reading.

Above all though, Martin's account is an incredibly detailed tactical analysis that swings back and forth between the Federal First Corps west of Gettysburg and the Federal Eleventh Corps north of town.  Ultimately, at the end of the day these two large Federal Army corps were shattered and forced back to a superb defensive position atop Cemetery Ridge just south of Gettysburg where they awaited the coming up of the rest of the Union Army of the Potomac.  It simply cannot be overstated how important it was that Federal battlefield commanders recognized the value of Cemetery Ridge and rallied their divisions and brigades to hold the high ground.

What became apparent to me as I read this book was that the first day of fighting at Gettysburg really was a coming of age for the Army of the Potomac.  Even though these two corps (i.e., the First and Eleventh) were significantly out-numbered, driven back and suffered significant casualties, they went toe-to-toe with the Confederates and stubbornly resisted (particularly the First Corps) and bought time for the rest of the Army to make its way up to the battlefield.  While Martin's book provides the detailed tactical analysis of the fighting, the end result is that Federal losses on the first day actually facilitated the huge Federal victories that followed on the second and third days.

This is really the story of the Federal Army of the Potomac and how its battle leaders and troops had finally become a fighting force that was no longer particularly intimidated by Confederate General Robert E. Lee and the Army of Northern Virginia.  The Federal commanders were, in the main, now as good as their Confederate counterparts, but most importantly the troops themselves believed that they could give as good as they got.  The victory at Gettysburg--begun on that critical first day--was the beginning of the end of any opportunity for Confederate military success in the Virginia theater of the Civil War.  It was now just a matter of time.

If you're a student of the Battle of Gettysburg, the American Civil War, or military history I highly recommend David G. Martin's account of the first day of fighting at Gettysburg.  While the maps included in the book are quite good, I found it very helpful to also have Bradley Gottfried's The Maps Of Gettysburg: An Atlas Of The Gettysburg Campaign, June 3--July 13, 1863 on hand to refer to periodically.