Review: "The Maps of Chickamauga: An Atlas of the Chickamauga Campaign, Including the Tullahoma Operations, June 22-September 23, 1863" By David Powell & David Friedrichs 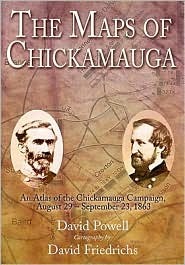 Absolutely brilliant!  In 2009, David Powell and David Friedrich combined, with the fabulous assistance of publisher Savas Beatie, to create one of the best ever books about the Battle of Chickamauga.  The Battle of Chickamauga was fought in the northwestern corner of Georgia on September 19-20, 1863, and Powell's text and the exquisitely detailed color cartography of David Friedrichs combine to precisely and definitively tell the complete story of the second bloodiest land-battle fought on the North American continent (only Gettysburg was bloodier).

This beautiful atlas starts the story of this fascinating, but not all that well known, campaign in June 1863 with Union Major General William S. Rosecrans and his Army of the Cumberland in Murfreesboro, Tennessee.  Just south of him is Confederate General Braxton Bragg and the Army of Tennessee in Tullahoma, Tennessee.  Rosecrans moves south and over the course of the next couple of months maneuvers Bragg's army southeasterly all the way to Chattanooga, Tennessee.  Finally, Bragg and the Army of Tennessee had enough and counter-punched, and counter-punched hard against Rosecrans in the long narrow valley through which Chickamauga Creek flowed.  With the text and 126 full-color incredibly detailed maps, Powell tells the complete story of this frenzied and chaotic bloody battle.  The maps and the text describe the movements of the units on the battlefield at the brigade and/or regimental level in increments of 15-30 minutes.  With this book in hand it would easily be possible to absolutely walk the battlefield in step--minute-by-minute--with those combatants in butternut and blue from nearly 150 years ago.

Finally, I highly recommend a combined reading of this book with Peter Cozzens' This Terrible Sound: The Battle of Chickamauga (reviewed below) to get the full flavor of the vicious intensity of the combat at the Battle of Chickamauga on September 19-20, 1863, in that densely wooded valley in northwestern Georgia.  Trust me, armchair Civil War historians, wargamers, and military history buffs are just gonna eat this book up!  Once you pick this atlas up you'll find that a couple of hours has just flown by as you slowly page through the book.  Big 'kudos' to Savas Beatie for the overall superb quality of the binding and printing of this book too, it'll last for years and years!

The Maps of Chickamauga: An Atlas of the Chickamauga Campaign
By David Powell & David Friedrichs
Hardcover, 319 pages
Savas Beatie, 2009

Posted by Christopher at 2:02 PM