Review: "This Terrible Sound: The Battle of Chickamauga" By Peter Cozzens 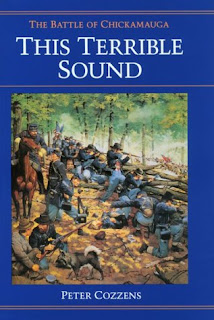 One of the largest land battles fought on the North American continent, and second only to Gettysburg in the total number of casualties (a total of about 36,000 killed or wounded), the Battle of Chickamauga was a horrific brawl fought in the dense woods in extreme northwestern Georgia over a two-day period in mid-September 1863.  I guess I can't really quite put my finger on exactly why the Battle of Chickamamauga has fascinated me most of my adult life, but it sure has.  I had a direct ancestor who fought on the Union side (21st Massachusetts) with the Army of the Potomac (in Burnside's Ninth Corps) in the Virginia theater, and for a brief period of time around Knoxville, Tennessee, but not at Chickamauga.  I guess it comes down to my assessment that a final and total victory in the Civil War ultimately favored the Union based upon the strategic and tactical results of the performances of Federal armies in the western theater.  The Battle of Chickamauga is sort of anomalous as it was a resounding victory for the Confederate Army of Tennessee that had, throughout most of the Civil War, been beaten by various Federal armies, but had also been pretty badly used by its own high command.

While most battles fought during the American Civil War were generally won or lost based upon the decisions of the army and field commanders, Chickamauga was really one of the very few battles with an outcome that was largely determined by the soldiers on the ground.  In spite of the leadership (or, lack thereof), this battle was a bloody testament to the tenacity of the fighting men in blue and grey as they engaged in this titanic two-day struggle.

In This Terrible Sound, Peter Cozzens has taken on the near-impossible task of trying to describe the completely confusing and chaotic fighting that occurred between the Union Army of the Cumberland, led by Major General William C. Rosecrans, and the Confederate Army of Tennessee, commanded by General Braxton Bragg.  This two-day bloody affair was fought in a long narrow valley that was heavily vegetated with pine and oak woods, limiting visibility between the combatants, in most places, to just a few tens of yards at best.  Most of the time intense combat flared up between the two armies as they blundered into each other in the dense woods up and down the valley.  Brigade and Division commanders tried to respond to threats by feel and sound, and in many instances guessed wrong.

Cozzens goes into great detail describing the command structure and personalities of the leaders in the Confederate and Union armies, and while the Confederate Army eventually prevailed at the end of the day, it was not due to leadership qualities among the Confederate command structure.  It was really much more the result of absolutely disastrous tactical decisions by Rosecrans and a few of his subordinates, and a hefty dose of just plain bad luck.  Had it not been for the steadiness and dogged defense exhibited by Union Major General George H. Thomas at Snodgrass Hill, the entire Union army may very well have been decisively routed from the field of battle, or even completely destroyed in place.  I was completely enthralled reading Cozzens' superb and detailed description about Thomas's day-long stand on the second day as he essentially bought time for the rest of the Union army to safely retreat from the Chickamauga battlefield and into defensive works in Chattanooga, Tennessee.  It really was very nearly an utter and complete disaster for the Union Army of the Cumberland, and with his tenacious defense Thomas earned himself the sobriquet "The Rock of Chickamauga".

While the Battle of Chickamauga was clearly a tactical victory for Bragg and his Confederate Army of Tennessee, it ultimately turned out to be a strategic defeat for the Confederacy, as Bragg let the Union Army safely get away and regroup in Chattanooga.  Eventually, Union General U.S. Grant came to Chattanooga and, replacing Rosecrans, he and Major General Thomas attacked and routed Bragg's army.  This opened up the way for Sherman's campaign on Atlanta and his later "March to the Sea".

Cozzens' writing style is personal and descriptive.  He gives you a very good feeling for the conditions on the battlefield, and for the experiences of the common soldiers in both armies as the battle raged back and forth.  He has drawn liberally, not only from official Confederate and Union records and reports, but also from letters and diaries and first-person accounts related by the veterans themselves.  This is a very compelling story about a battle that really receives little attention when it comes to discussions about the American Civil War, as most tend to focus on the campaigns and great battles that occurred in the eastern theater of the war.

While Cozzens has included twenty-five very detailed maps, it was still difficult to fully comprehend the complicated and chaotic movements and counter-movements of the brigades and regiments as the fighting surged up and down and back and forth across the valley over the entire two days of the battle.  I was so glad to have, readily available, David A. Powell's The Maps of Chickamauga: An Atlas of the Chickamauga Campaign, Including the Tullahoma Operations, June 22 - September 23, 1863 (reviewed above).  This is a "must-have" if you truly want to maximize your experience reading Cozzens' brilliant book.  I really enjoyed them both, and if you're a Civil War or military history buff I think you will as well.

This Terrible Sound: The Battle of Chickamauga
By Peter Cozzens
Hardcover, 688 pages
University of Illinois Press, 1992

The Maps of Chickamauga: An Atlas of the Chickamauga Campaign, Including the Tullahoma Operations, June 22 - September 23, 1863
By David Powell & David Friedrichs
Hardcover, 319 pages
Savas Beatie, 2009

Posted by Christopher at 1:49 PM