Review: "The Europeans" By Henry James 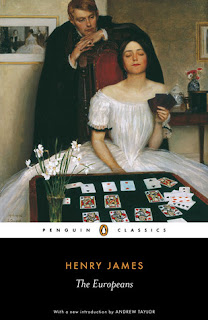 The Europeans is an absolutely delightful novel!  Fun from the first page through the last.  Also, it is really more of a novella and can easily be read in one or two sittings.  The Europeans was written by Henry James in 1878.

The Europeans is actually a 'flip', if you will, in the normal Jamesian plot-line.  In other words, rather than the story of an American expatriate in Europe, this is the tale of two American expats who come back to visit family in New England.  This is the story of Eugenia, the Baroness Munster, and her younger brother Felix Young, who leave Germany because of her disintegrating marriage to a German prince.  They end up moving in with the Wentworths, relatives on their late-mother's side of the family.  I gotta say at this point too, the reader is gonna fall in love with Gertrude Wentworth--pretty much like everyone else in the novel!

Obviously, the staid New England Puritan Wentworths and their neighbors are largely over-awed by their European cousins, but everyone settles in after a bit and 'the good times roll'.  Felix is an artist--a genuine good natured fellow and free spirit--and a big hit among all of his American friends and family.  Eugenia, the Baroness, is a bit more of an enigma, and everyone minces about around her, but she too is actually a good soul.  She ends up being a positive influence on several of the novels more important characters.

Romance abounds among all of the young people, and while it is fun to watch the flowers of love open and blossom, it is also worth following James as he guides the reader through the comparisons and contrasts between the pragmatic European continental sensibilities of Eugenia and Felix, and the fresh, but restrained New England practicalities of the Wentworth son and daughters and the Acton brother and sister.

This a free-spirited, flibbertigibbet novel that asks for nothing more than that the reader sit back and enjoy it.  It ain't deep, it ain't all that serious, it is simply a heck of a good little story that upon finishing you realize that you're very glad that you read it.  And you know what?  I'll read it again sometime.  Solid four of five stars for me!

Posted by Christopher at 2:45 PM