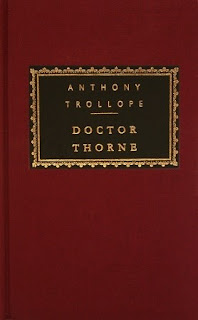 Anthony Trollope's Doctor Thorne (1858) is a novel that lulls you into a state of complete and blissful immersion in Trollope's fascinating borough of Barsetshire.  This is the story of a country doctor, the eponymous Doctor Thorne, and his lovely niece, Mary Thorne, and of their interactions with the landed 'Old World' gentry and the nouveau riche.  While this is certainly a novel about romance, it is also a hard and critical social commentary directed at class differences and manners.  This novel explores the old adage that "money is the root of all..."

Frankly, I've come to realize that Anthony Trollope is simply one hell of a story-teller, and with this tale I'd swear that the shade of Jane Austen was perched over his shoulder as he wrote Doctor Thorne.  It has a Dickensian cast of characters without the grotesque or patently comedic, and actually ends up leaving the reader with the sense that this was probably a fairly accurate portrayal of life in rural Victorian England.

While Doctor Thorne is included within Trollope's series, The Chronicles of Barsetshire, it stands alone quite nicely, and there are even a few characters from his later series, The Pallisers, that briefly appear in the tale.  In sum, this is a terrific novel that engages the reader right from the start and then rollicks along to its very satisfying conclusion.  I highly recommend Trollope's Doctor Thorne and look forward to picking this up again for a reread sometime in the future.  This was solid four of five stars for me.