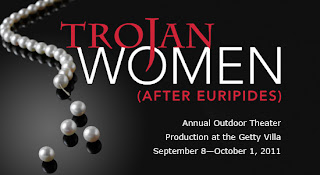 In a posting on September 25th, I mentioned that my wife, Susan, and I were going to be attending a performance of Euripides' Trojan Women by the SITI Company at the Getty Villa in Malibu, California, on October 1, 2011.  It is my opinion that there may not be a better outdoor venue for the staging and production of classic theater anywhere in the United States.

In 1954, J. Paul Getty opened the J. Paul Getty Museum at the Malibu site.  Once the new Getty Museum was opened in 1997 in the Sepulveda Pass, the Getty Villa in Malibu was then completely renovated and ultimately reopened to the public in 2006.  It now houses the Getty's antiquities collections of arts associated with the cultures of ancient Greece, Rome, and Etruria.  The Villa itself is modeled after the Villa dei Papiri, a Roman country house in Herculaneum that was buried in the eruption of Mount Vesuvius in 79 A.D.  I have to say that if you're in the Los Angeles area, I strongly recommend that you visit the main Getty Museum, the Getty Villa in Malibu, and the Los Angeles County Museum of Art (LACMA).  These really are three of the best museums in the country, in my opinion.

On the property of the Getty Villa is the Barbara and Lawrence Fleischman Theater.  It is an outdoor amphitheater just like those found among the ruins of the cities and towns of ancient Greece.  Each fall (typically September and early-October), the Getty Villa stages performances of classic theater in this amphitheater.  For example, recent classical performances have included productions of Aeschylus' Agamemnon, Sophocles' Elektra, Euripides' Hippolytos, and Aristophanes' Peace.  For its fall performance in 2012, the Getty is scheduled to put on Euripides' rarely performed play, Helen.

In preparation for seeing the play, I did take the opportunity to read a recent translation and discuss it with Susan.  I chose to read the translation by Alan Shapiro that is included in The Complete Euripides: Volume I--Trojan Women and Other Plays (Oxford University Press, 2010).  This is a powerful, hard-hitting and relentless tragedy that essentially forces the reader to acknowledge the absolute devastation of war and its utter futility.

In a nutshell, the plot of Trojan Women is as follows--


The Trojan War is over, the Trojans have been defeated and the Greeks are victorious.  All that remains for the Greeks is to load up the booty of war, raze the city to the ground, and sail for home.  Part of the 'booty' to be divvied up are the Trojan royal women, including the Trojan Queen Hecuba, and her daughters, Cassandra and Polyxena; Hector's wife, Andromache; and Paris' concubine, Helen (formerly the wife of Menelaus, one of the Greek chieftains).  The play covers the few hours of time as these women come to realize the full extent of the devastation that has been visited upon them and their beloved Troy, and as they learn what is to become of them as they 'farmed' out to the various Greek commanders.  Hecuba starts the play with a long lamentation, almost an ode to grief as she recounts the death of King Priam, the death of all of her sons, and the sack of Troy--and it just gets worse and more tragic from here.

We find out that Hecuba's daughter, Cassandra, the virgin prophetess/priestess of Apollo, has been awarded as a concubine to Menelaus' brother, King Agamemnon of Argos; and that Andromache is to be given to Neoptolemus, Achilles' son; Hecuba's daughter, Polyxena has just been sacrificed on Achilles' tomb; and that Hecuba herself is to be given as a slave to serve Odysseus.  We also learn that Helen--"the face that launched a thousand ships"--is to be returned to Sparta to meet her fate at the hands of her husband, Menelaus.  The final insult comes near the end of the play when the young son of Hector and Andromache is taken and hurled from the walls of Troy by the Greeks--thus extinguishing the royal line of Priam and Troy.  Hecuba now knows that even Hope itself is gone as she laments, "O child, O city--what's left to suffer? How much further/Can we fall into complete destruction?"

Last night was also the last performance of Trojan Women (After Euripides), and it was completely sold out.  Susan and I headed down to the Getty Villa late in the afternoon.  The weather was absolutely ideal too, with an evening temperature in the mid-70s.  Our plan was to arrive early enough to have a nice dinner on the veranda overlooking the amphitheater and take in the ambiance, and then be able to select good seats for the performance.  An added bonus was that while we were eating we were able to watch the actors and actresses come out onto the stage at the base of the amphitheater and practice their movements and warm up their voices.

The SITI Company's performance was directed by Anne Bogart, and used an adaptation of Euripides' play written by Jocelyn Clark.  The ensemble's acting during the performance was simply magnificent!  I especially wish to acknowledge the performance of Ellen Lauren in the role of Queen Hecuba.  Hecuba is on the stage during the entire performance, and she delivered her lines with passion, emotion, drama and pathos.  The pitch of her voice rose and fell with the tortured movements of her body as she delivered her lines and I was swept into the vortex of her lamentations, her overwhelming grief, and her palpable anger at the Greeks and her antipathy for Helen, whom she blamed for all that had befallen Troy and her family.  Lauren's performance was just stunning--from start to finish!

The characters and roles of Cassandra, Andromache, and Helen were generally solidly performed; although I thought the character of Cassandra, played by Akiko Aizawa, was perhaps a little 'watered down', from that of Euripides' original. Cassandra's foretelling of what befalls the House of Atreus--as well as herself and Agamemnon--is so significant and emotionally powerful, and is the source of several other superb tragedies by Aeschylus, Sophocles, as well as Euripides.  Cassandra's prophetic lines in Euripides' play injects that note of utter horror at what is out there looming on the horizon for Agamemnon, his wife Clytemnestra, and their children Orestes and Elektra (and I highly recommend a reading of Aeschylus' The Oresteia for this horrifying story).  I just didn't pick up on that as much in Clarke's adaptation as perhaps I would have liked.  What worked really well in the performance though was the 'debate'--almost an indictment and trial, if you will--between Hecuba, Menelaus, and Helen.  While Helen tried to foist the blame for all that has happened onto Aphrodite (the Goddess of Love), Paris, or even Hecuba herself, no one buys it.  The only question that is not answered by this adaptation, or even in Euripides' original, is what does finally happen to Helen (and that is left for other plays).


There were a several very apparent and intriguing deviations from Euripides' original that Clarke introduced in his adaptation.  The first was the use of Poseidon as a moving stage prop, if you will, during the entire performance.  In the original play, Poseidon provides an introduction and tells the audience about his founding of Troy, helping to build the city, and his rage that the other gods and goddesses have all conspired against him to bring the city down.  That was done here as well, but then Poseidon kind of lurks in the background, with an arm stretched out toward whichever woman happened to be speaking at the time.  It almost seemed to make Poseidon appear impotent and incapable of doing anything--and maybe that it is precisely what Clarke was striving for here.  Another deviation was that instead of Andromache giving up her son, Astyanax, to Talthybius (the Greek envoy, or Herald) to be hurled to his death from the walls, she smothers the infant to her breast and gives the little corpse to the Greeks to 'save' him from being killed at the hands of the Greeks.  Hmm, I need to think on this for a while, maybe it worked, but maybe it didn't.  Finally, Clarke's adaptation also included a role for Odysseus, who makes an entrance toward the end of the play, and makes pronouncements on behalf of the Greek commanders and kind of tidily wraps everything up.  All in all, I think that this worked well, and reinforced the kind of casual and impersonal way that the Greeks approached the sack of Troy and enslavement of the women.

Both, Susan, and I unhesitatingly gave this performance 4 out of 5 stars.  The acting was very, very good.  Jocelyn Clarke's adaptation was bold and audacious, and I think mates up well with Euripides' original.  The costuming was magnificent too; with the women in simple white gowns or robes, the Greek herald Talthybius is a black uniform like that of a SWAT policeman, and Menelaus and Odysseus in crisp, neatly tailored suits.  The staging of the play on the portico of the Getty Villa and on the slate stage of the amphitheater was just exquisite and just added ever so much to our overall experience.  While this play was written by Euripides in 415 B.C., and may have been written as a protest against Athenian militarism and hegemony during the Peloponnesian War, it still comes across as one of the great anti-war statements of all time.  If you have the chance to see any production of Euripides' Trojan Women, I highly recommend that you avail yourself of the opportunity.