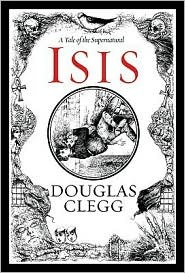 Fall is here!  It is the season for raking leaves, digging out the warm winter jackets and wool hats, and getting your pumpkin ready for the visits of your neighborhood's little ghosties and goblins on Halloween.  If you're looking for a spooky little literary 'treat' for yourself, look no further--I have a recommendation for you.

Two years ago, while wandering around my favorite bookstore, on a whim I picked up a hardcover edition of a novella by Douglas Clegg entitled, Isis.  This little book of just 113 pages is heartbreakingly good, and is profusely illustrated with beautiful and very detailed pen-and-ink line drawings by Glenn Chadbourne.  Honestly, I think the primary reason I purchased the book initially was because of the quality of the illustrations.  It really piqued my interest as soon as I picked it up and flipped through it.

Isis is a gripping and truly macabre tale.  In essence, Clegg has given the reader a superb retelling of the ancient Egyptian Osiris and Isis myth.  Isis is set in Cornwall during the Victorian Period, and is a classic tragedy involving Love, Life, and Loss as experienced by a young woman, Iris Villiers, and her twin brothers, Harvey and Spencer.  The young people and their mother are staying at the decaying old mansion--Belerion Hall--that has been in the Villiers family for many, many years.  As befits a good scary story, there is an ancient and decrepit family burial ground next to the house that is known by the locals as "The Tombs", and the children are warned off of the place by the gardener, "Old Marsh".  While a quick read, Clegg's writing in this book is really quite good and deserves to be savored slowly.  Here's a little sample describing one of Iris's jaunts out across the Cornwall landscape--


"When the sun came out--for the summers at Belerion Hall were often long and pleasant--I saw the distant stone arches out along the tidal island that seemed to float atop turquoise waves.  I could sit near the cliff's edge on a beautiful summer's day and imagine the white sand below the cliffs to be full of pirate treasure.  My first governess told me of the seven stones in the old harbor to the west called "The Tin Men"; they had once been miners and had gone so deep into the earth that they were turned to rock itself.  Now they sat in the sea, having swallowed enemy ships that had attacked the port centuries before.  I loved the legends and tales, and in the village, where some of the folk spoke the old language, I began to learn a bit of it slowly and loved being able to say a word or two in Cornish."

Or, this wonderful description of Iris in her grandfather's library--


"On rainy days, I explored my grandfather's immense and musty library, with its volumes of strange and wonderful books. It had no windows at all, so I could forget the gray wintry world outside. Its ceiling looked like elegant chocolates from a London confectionery, and it had bookcases so high that I had to climb ladders to see it all. I crept over to the hearth rug with several books and lay there in front of the huge stone fireplace to begin my escape from Belerion Hall through the pages of novels and histories."

Clegg's writing (this tale, at least) reminds me a bit of some of George Eliot's earlier works, or that of Thomas Hardy, as there's always that hint of bleakness or forthcoming tragedy lurking in the background. Clegg also does a superb job of blending bits of Celtic or Druidic legend and myth in with his retelling of the Isis/Osiris story, and it all works really, really well.  I'm not going to say any more about the plot of the book, but suffice it to say that it has a series of twists that you probably won't see coming and that will both surprise and horrify.  This is probably not a tale for the very young either; it is dark, gritty, realistic, and terribly bittersweet, with some pretty significant moral lessons throughout.  This hauntingly beautiful novella is one to read while safely ensconced in a warm living room in front of a crackling fire with a nice steaming mug of hot apple-cider.  Have a Happy and Safe Halloween and do let me know how you liked Isis.

Posted by Christopher at 3:24 PM