Short Story Review: "The Romantic Adventures of a Milkmaid" By Thomas Hardy 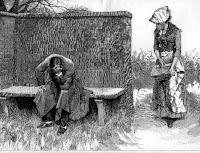 What I am doing here is a first for me on ProSe.  Normally, I review books I've completed reading, including collections of short stories.  In this case, I really want to share my observations and thoughts about one short story in particular from a collection of Thomas Hardy's stories entitled The Withered Arm and Other Stories (Edited by Kristin Brady, Penguin Classics, 1999).  Within this superb collection of stories, written by Hardy between 1874 and 1888, is a truly fascinating tale of near-novella length titled The Romantic Adventures of a Milkmaid.  Hardy wrote this story while living in Wimbourne in Dorset, and it first  appeared in a special 'summer edition' of the 1883 Graphic literary journal.  The story was also simultaneously published in seven installments from June 23rd through August 4th in Harper's Weekly.  I want you to read this story so much that I am also providing a link to an electronic version of the story so that you can download and print it.  Here's the link to The Romantic Adventures of a Milkmaid.  Bear in mind that this on-line version is slightly different than the version I read in the Penguin Classics collection.    The version I've attached is from Hardy's final manuscript for a 1913 collection of his short stories that was published under the title A Changed Man, The Waiting Supper, and Other Tales, Concluding with The Romantic Adventures of a Milkmaid; but the changes he made to the story were relatively minor and more editorial in nature.

While 'Romantic Adventures' may not be Hardy's best short story, it is in my opinion nonetheless vintage Hardy, and very much well-worth reading.  Let me explain why I say that.  First, as expected, Hardy places us firmly in his 'Wessex' landscape; a pastoral place with an emphasis on Nature and the ever-changing seasons, and the country rustics that occupy and work the land.  Second, and while perhaps formulaic, the story utilizes a well-worked literary device--the 'romantic triangle'; and in this tale we have the young and innocent milkmaid and her two potential suitors.  Thirdly, Hardy, in crafting the tale, has cleverly incorporated themes from well-known fairytales like Little Red Riding Hood and Cinderella, and allusions to the ballad James Harris (The Daemon Lover).  Finally, I believe that Hardy uses this story as a bit of  a 'dry-run' in an effort to develop his plotting, character development, and thoughts associated with what was to become one of his major literary achievements-- Tess of the d'Urbervilles (1891).

Without giving away too much of the plot, let me say that 'Romantic Adventures' revolves around the milkmaid, Margaret 'Margery' Tucker; the world-wise, morose, and quasi-Byronic hero, Baron von Xanten; and Margery's beau, the rustic lime kiln operator, James Hayward.  The story opens with Margery, in her pink dress, carrying a basket of fresh butter and walking through the woods on her way to her grandmother's house ('Ah,' you say, you see where this is going, don't you?).  While taking a shortcut, Margery meets the mysterious Baron who has recently occupied a manor house so that he can indulge himself in meditation and trout fishing.  The Baron tells Margery that her interruption at that very moment has averted a great personal crisis (see the original illustration, above), and offers to reward her with a gift or "a treat."  Margery thinks for a moment, and then says that she'd prefer to think on it a while and could she give her answer later?  The Baron says that he will come to see her at dusk outside the stile on the edge of her father's property.  She tells the Baron that her wish is to attend a ball, and that she wants to dance like a lady.  The Baron tells her that he will grant her wish--Margery will get her ball!  I think I shall stop here, but suffice it to say that the tale spins on quite magically from this point forward with significant fairytale-like qualities.

Kristin Brady, in her insightful Introduction to the collection, says of 'Romantic Adventures' that the story


"...shows how a rural milkmaid might make a 'demi-god' of a suitor above her in class, while he might see her equally falsely, as a figure of pastoral simplicity and naturalness."

Hmm, does this comment bring to mind elements of another Hardy plot?  How about the situation of 'Tess Durbeyfield' and 'Angel Clare' in Tess of the d'Urbervilles?  Throughout this compelling little novella I found all sorts of images, bits of dialog and description, including geography, that all seem to point to and anticipate the later 'Tess.'

Interestingly, 'Romantic Adventures' is not so much a story of romantic love, as no one really 'falls in love' with anyone else.  It is all about the 'fantasy' or 'desire' of romantic love that each of the characters fosters in his or her mind.  Jim believes himself to be in love with Margery whom he has intended to marry for several years.  Margery is more than intrigued with the notion of the Baron loving her and traveling the world with him on his yacht.  In my opinion, the Baron is perhaps the most complicated and enigmatic character of all.  It is not at all clear what his real intentions are until the very end of the story.  In some instances, the Baron seems predatorial like the 'Wolf,' and in others he is truly Margery's 'Prince Charming,' and in still others he is making 'Mephistophelian' bargains with both Jim and Margery.  Clearly, the Baron has enchanted Margery, and to some degree, holds young Jim Hayward in his thrall as well.  Conversely, while the Baron is undoubtedly bewitched by the young and innocent milkmaid, he also very much admires and respects the fortitude and constancy of Jim's commitment to Margery.

The ending of the story may be a little, as Hardy would say, "phantastical"; but it is, nonetheless, a satisfying conclusion.  I couldn't put it down once I started reading.  In fact, I was so enamored with the plot and characters, recognizing the links and relationships to 'Tess' and some of Hardy's poetry, that I decided to read it again more carefully and then work up this blog posting for all of you.

If you haven't read 'Tess' yet, this will be an intriguing and enjoyable prelude; if you have, you'll feel clever and enjoy finding glimpses of that later great novel in this story.  There is also an interesting brief discussion of marriage between Margery and Jim that seems to portend the deeply philosophical and intensely emotional discussions between Sue Bridehead and Jude Fawley in Hardy's final novel, Jude the Obscure.  Also, as is typical for Hardy, this story is full of literary allusions to Greek mythology, the Bible, Shakespeare, Tennyson, and as we have discussed above, fairytales and ballads.  If you are a teacher, I should think it would be simply brilliant to have your students read this in conjunction with 'Tess'; or use it on its own, as I'm betting that it will engender significant discussion.  This was a fun and challenging little tale to dig into, and I hope you enjoy it as much as I did.  I'd love to hear your thoughts and comments too.

Posted by Christopher at 1:43 PM