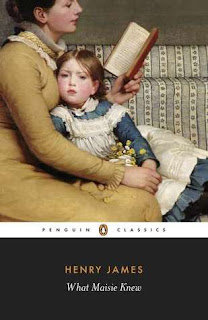 In the annals of classic fiction I have encountered some truly monstrous parents (some of the parents in Austen or Dickens certainly come to mind), but the mother and father of little Maisie Farange must surely be the worst.  They are truly beyond despicable, and if I could reach into the pages of Henry James's What Maisie Knew, I'd throttle them both!  Okay, now that I've gotten that off of my chest, perhaps I can provide an objective review of this novel.  What Maisie Knew was written by Henry James in 1897, while he was still living in London.

The structure of this sophisticated novel is extraordinarily clever, as the entire plot is laid out from the perspective of the little girl, Maisie (and keep the title of the novel in mind as you read too).  The novel starts off with the parents being granted a divorce and the court awarding that custody of Maisie will be shared.  This poor little girl has to spend six months with her father and then be packed off for six months with her mother.  What is even worse is that the parents use Maisie in their on-going fight-to-the-death with one another, while at the same time they take on new spouses (and then immediately begin adulterous relationships!).  And while Maisie is wise beyond her years and quite perceptive to what is going on around her in the world of the grown-ups that she is surrounded by, much of what she observes has to be interpreted through the lens of the experience of her own childhood and the little bit of love and kindness bestowed upon her from a scant few of the adults--but not her own parents--around her.

Through the course of the novel Maisie does gravitate to the two characters that do seem offer her the hope and opportunity of kindness, love, and some semblance of stability, and those two characters are her governess, Mrs Wix, and her mother's second ex-husband Sir Claude.  Sir Claude has his own 'bag-of-issues' to deal with, but he is really and truly genuinely concerned about Maisie and her long-term welfare.  He ends being more of father-figure to the little girl, by a long-shot, than her own father did on his very best day.   Ultimately, these two people, whom Maisie trusts with her heart and soul, do end up making the right decisions that give this little girl a chance for a wholesome life.

Finally, it needs to be said that there's much in this novel that can offend modern sensibilities, particularly when it comes to how children are looked after (or not), guardianship issues, or even the exercise of parental responsibilities (or not!).  The reader needs to remember that there weren't governmental agencies like 'Child Protective Services' in Victorian England to provide that safety net for children in Maisie's situation.  Henry James, like Charles Dickens before him, seems to have been much affected by child welfare issues, and I have to think he was trying to make a point here that parental responsibility is a duty and an obligation and that love and a nurturing stable environment are what every child needs and deserves.  As painful as it was to read, I'm glad that I read What Maisie Knew, and look forward to reading it again in the future.  At this point, I would give this 3.5 stars out of five.

But I still want to reach into the pages of this novel and throttle both of her parents!

Posted by Christopher at 2:33 PM