Review: "The Bostonians" By Henry James 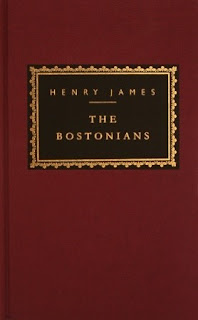 This was an interesting novel to read.  In all honesty it was serious step down from the masterpiece that precedes it, i.e., The Portrait of a Lady.  Having said that though, I think James perhaps intended this book to be lighter fare than Portrait.  In fact, The Bostonians, written by James in 1886, is loaded with satire, irony, and a goodly number of comedic moments.

The novel's plot revolves around two cousins, Olive Chancellor and Basil Ransom, and the relationship that each desires to have with a young red-headed woman of magnetic personality, Miss Verena Tarrant.  Verena and Olive are both deeply involved in the suffragette movement of the 1870s in the United States.  Basil Ransom is a Confederate Civil War veteran from Mississippi now trying to eke out a living as a lawyer in New York City.  While the two women spend much time in the novel speechifying on their commitment to women's rights, and Basil spends much of his time jocularly refuting their positions, the novel isn't really about feminism, it is all about relationships and feelings.

While Basil's efforts at establishing a romantic romantic relationship with Verena Tarrant were really rather predictable, it was the relationship between Verena and Olive that perhaps intrigued me the most.  There's an ambiguity about Olive and her motives that puzzles me still, and while it might be easy to interpret Olive's feelings for Verena as a quasi-homosexual love, I also think that interpretation might mostly miss the mark.  It is my understanding that it was this novel that actually gave rise to the term "Boston Marriage" describing the relationship of two unmarried women living together.

Finally, as I sit here and process my thoughts upon completing the novel, I have come to the conclusion that both Olive and Basil use and manipulate Verena for their own purpose.  Verena, in my opinion, when she is first encountered by Olive and Basil, is brimming with the "Joy of Life" and is absolutely true to herself and her own feelings.  Through the course of the novel she falls prey to the machinations and manipulations of both cousins, and ultimately ends up becoming in many ways much more like each of them.  And I'm not sure that this is best for Verena.

Before I settle on my final verdict for James's The Bostonians, I would like to read it again sometime.  I really do think there are a lot of undertones lurking about in this tale that can only be ferreted out upon subsequent reads.  This is most definitely a historical novel, and some knowledge about the suffragette movement and spiritualism of the 1870s and life in post-Civil War America would surely help the reader put many of the themes and discussion topics in context.