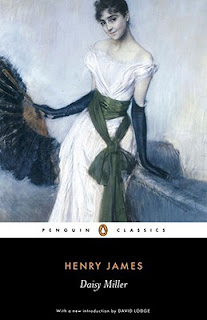 Henry James is a prismatic kind of fellow with his fiction.  I am beginning to understand that he likes to write about his characters and actions from differing perspectives, and his novella Daisy Miller is certainly an excellent example.  Daisy Miller was written by James in 1878, and first serialized in Cornhill Magazine, edited by Virginia Woolf's father, Leslie Stephen.

In this short tale, the eponymous Daisy Miller is a wholesome and fresh young American woman on her first tour of Europe with her nine-year old brother, and her mother, who seems to be a bit of a hypochondriac.  In Vevay, Switzerland, Daisy meets an American expatriate, Mr Winterbourne, who is visiting his aunt.  In his late-twenties, Winterbourne becomes quite taken with the vivacious Daisy, and accompanies her on an unchaperoned tour of a nearby castle, drawing words of warning from his aunt.  He encounters Daisy again later in the season in Rome and finds that she is spending much of her time with an Italian young man, much to the chagrin of the American expat community who begin to shun her in society.

Daisy Miller is all about perceptions and misunderstandings, and it seems that most of them work to the detriment of Daisy and her reputation among the expats.  Winterbourne and the reader eventually do come to terms with Daisy and her 'free-wheeling' way of experiencing life, and come to realize that she is genuinely innocent and is much misunderstood and maligned by the Society wags around her.  The reader eventually realizes that perhaps it is not Daisy that has the problem with societal norms and cultural values, but that the expat definition of appropriate behavior is outdated and out-of-touch with the 'modern' Americans that are now coming over to Europe from places like Daisy's Schenectady, New York.

This is an extremely well-written story that quickly engages the reader, with well-constructed characters, and a fascinating plot that provides a terrific snap-shot of what life must have been like in the latter half of the 19th century for Americans traveling abroad in Europe.  While the ending is somewhat unexpected and sad, it makes the story even more powerful and thought-provoking.  Finally, it is worth mentioning that a wonderful book-end to Daisy Miller is a short story written by Edith Wharton in 1934, entitled Roman Fever.  I strongly recommend reading Wharton's short story once you've completed Henry James's Daisy Miller.

Posted by Christopher at 2:39 PM