Review: "The Reef" By Edith Wharton 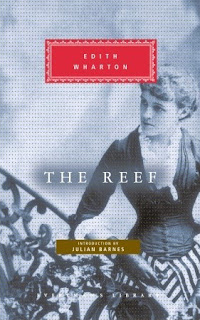 Edith Wharton's The Reef was written in 1912 when she was essentially at her very best as a novelist, and I think her powers are quite evident in this engaging tale.  Also, this is a very theatrical story that I personally think would lend itself very well to a stage adaptation.  The book could just as easily have been entitled, The Chateau, as basically three-quarters of the novel takes place within the confines of Mrs Anna Leath's French estate, Givre.

This is the story of romantic relationships, double-standards and consequences among four Americans in Europe just before the First World War, and the entire plot turns on the things said and unsaid among the four protagonists.  Wharton, through the course of the novel, puts the reader squarely inside the mind and emotions of each of the four characters.  Consequently, it becomes hard to say with any certainty that this person is right, or that that person is wrong.  It is simply a "Human Story" and mistakes are made by each in turn, and this reader found it damnably difficult to side with one over the other.  Another element that I found intriguing is that Wharton only gives the reader the barest amount of background information about each of the characters throughout the book, as she wants the reader to focus on and fully experience the emotional crisis and psychological struggle that each is undergoing as the tale plays out.

While devastatingly painful to read at times, The Reef is an insightful portrait of the interactions among the men and women of "Society" at the beginning of the 20th century.  In some respects the moral ambiguity and dilemmas faced by Wharton's characters in The Reef really have not changed all that much--people still fall in love, deception still occurs, and feelings still mean everything.  When done with the book, one can't help but realize that Wharton's title--The Reef--is spot-on.  The challenge that each of us faces as we move through life is to sail carefully, but exuberantly, and avoid crashing on the reefs that will always be perilously close.  I am so glad to have read this and look forward to picking it up again sometime.  I unhesitatingly award this novel four of five stars.