Review: "The Portrait of a Lady" By Henry James 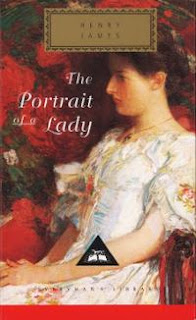 One of the most enthralling and enchanting novels that I've read in a long, long time.  The Portrait of a Lady is early Henry James (written in 1881), and as cliche as it may sound, it is a veritable masterpiece.  There is simply so much going on within the covers of this elegantly crafted and sophisticated novel that it will take me a while to sort out my swirling thoughts and emotions upon finishing it.  Simply put though, this is the story of the young American woman, Isabel Archer, and her voyage of self-discovery among the staid and traditional landscape of British and European society.  Isabel's ability to 'choose', and the 'choices' she makes are the thread that is carefully woven throughout the novel, and it raises her stature as a fictional heroine, in my opinion, to the level of that of an Anna Karenina or Dorothea Brooke.  The novel's Chapter Forty-Two--with Isabel, by herself, sitting in the darkened room thinking for most of the night--is perhaps the greatest psychological tour-de-force I've encountered in fiction.  I reread that chapter probably four times in a row, and simply marveled at the creative genius that is Henry James in writing this novel and creating the character of Isabel Archer.  Stunning stuff!

This is an immensely powerful and profound novel that I am going to reread again very soon.  I want to reread it in conjunction with a reading of Michael Gorra's recent book, Portrait of a Novel: Henry James and the Making of an American Masterpiece, a runner-up for the 2013 Pulitzer Prize for biography and autobiography.  Give me a couple of weeks to reread The Portrait of a Lady and Gorra's book, and I'll be back in an effort to provide a more comprehensive review that will do justice to what just may be, in my very humble opinion, the 'Great American Novel'.  There really is ever so much to say about this most amazing novel.  There is no doubt in my mind that this is one of the best novels I've read in a couple of years--a genuine classic!  Five of five stars!

The Portrait of a Lady
By Henry James, 1881
Everyman's Library Edition
Hardcover, 672 pp.