Review: "The Touchstone" By Edith Wharton 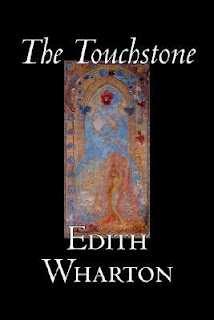 I just finished reading The Touchstone again, in conjunction with reading Henry James's The Aspern Papers.  I believe that The Touchstone may have been Wharton's first published work of fiction too.

The novella tells the story of Stephen Glennard a youngish gentleman of New York's upper-crust society who is trying to find the financial wherewithal to marry his fiance, Miss Alexa Trent.  Sitting in his club one evening he encounters an advertisement from a Professor Joslin who is looking for any papers and correspondence from the late author, Miss Margaret Aubyn.  Miss Aubyn just happens to be the woman that Glennard had had a long-term intimate relationship with almost up until she died a few years earlier.

In short order, the reader discovers that Glennard has bundles and bundles of very personal letters that he received from Miss Aubyn during the course of their relationship.  He then decides to have them published, and the two-volumes become a huge literary hit with the reading public.

As people begin reading the volumes, particular those in Glennard's circle of friends, he finds out that most people are frankly appalled that anyone would expose these intimate letters to public scrutiny. It is not long before Glennard himself begins to doubt his own motives for publishing the letters, and it begins to negatively impact his own relationship with his now wife, Alexa.  In fact, they've even bought themselves a nice little house on the outskirts of New York City with the riches he's gained by selling the letters.  Even Alexa--who doesn't know that these intimate letters were addressed to Glennard, or that he's sold them--is basically horrified that anyone could be so callous and black-hearted as to open this incredibly personal window into Miss Aubyn's heart and soul.

For much of the novella the story revolves around the struggle and tension between Glennard's desire to do right and provide a meaningful income and life for his new wife, and the increasing guilt he is feeling for his betrayal of his former relationship with Miss Aubyn.  It builds to an important and emotionally powerful climactic scene involving Glennard and Alexa.

I suggest that a reading of Edith Wharton's The Touchstone can be significantly enhanced by first reading Henry James's The Aspern Papers (1888).  The topics of personal privacy, betrayal, trust, and the role of literary biographers and academic research are really front-and-center in both novellas.  Which is perhaps not all that surprising considering that Edith Wharton and Henry James not only knew each other well, but became very good friends.  Finally, The Touchstone truly is a most excellent introduction to the fiction of Edith Wharton, the first woman to be awarded the Pulitzer Prize for Fiction in 1921, for her novel, The Age of Innocence (1920).