Review: "The Real Eve: Modern Man's Journey Out of Africa" By Stephen Oppenheimer 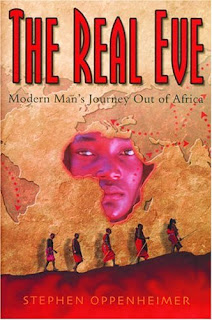 Much of this book is an incredibly compelling melding of the existing paleoanthropological, archaeological, and genetic evidence that, when combined with known ecological and climatological data, tells the story of these robust early modern humans that undertook this grand journey that completely changed the world we live in.  Oppenheimer carefully presents and considers all of the available archaeological evidence and the conclusions drawn from it, and then compares it with the results of the now extensive amount of genetic research associated with maternal mitochondrial-DNA and male Y-chromosome analyses.  Oppenheimer believes that we now have answers or, at a minimum, some pretty compelling hypotheses that go far in addressing questions about who these peoples were that trekked along the coasts colonizing the Near East, eastern and western Europe, India, southeast Asia and eventually even New Guinea, and Australia; while others continued 'coasting' up along the Asian-Pacific coast before turning inland and settling the hinterlands of the ice-age steppe tundra of Siberia and Mongolia.  Finally, Oppenheimer addresses one of the most contentious issues in modern archaeology--that of the settling of the Americas.  When did modern humans reach the Americas?  Who were these early colonizers? Where did they come from?  Did they come in a single wave following the end of the last ice-age, or were there multiple entries?  And were the Clovis peoples really the first to arrive about 12,000 years ago?

The organization of this book in its seven chapters is simply superb too, in my opinion.  Dr. Oppenheimer starts off with the fascinating discussion of our early modern human ancestors in Africa, and what it was that might have compelled them to leave Africa between 80,000 and 90,000 years ago.  He then spends time describing the archaeological evidence associated with the potential routes of initial dispersal from Africa (i.e., a northern route through the Levant, or the southern route--the preferred alternative--via the Bab al Mandab at the bottom of the Red Sea and the Horn of Africa).

The second chapter is equally fascinating, and addresses the all-important question of when did anatomically modern humans become 'behaviorally modern'.  This has been a vexing question to paleoanthropologists and archaeologists for some time now, and there is a considerable body of evidence out there that can be interpreted quite differently.  Frankly though, I'm leaning toward agreement with Dr. Oppenheimer that the appearance of anatomically modern humans between 200,000 years and 170,000 years ago was largely concurrent with the appearance of our behavioral modernity as well.  In contrast, there are many well-respected anthropologists, e.g., Richard G. Klein of Stanford University, who believe that Homo sapiens became behaviorally modern sometime around 50,000 years ago, the result of additional adaptations within the human brain.  Oppenheimer and other geneticists have not yet ferreted out what this change might have been, nor does he believe that the archaeological evidence supports this theory.  All in all, I found this a very thought-provoking chapter.

The remainder of the book's chapters (i.e., 3-7) focus on detailed archaeological and genetic discussions of the timing of the entries into the various regions of the world colonized by the mitochondrial 'Out-of-Africa Eve' and Y-chromosomal 'Out-of-Africa Adam' and their genetic descendants.  Chapter Three describes the types of people and timing of the colonizing of eastern and western Europe.  Chapter Four focuses on the colonization of India, southeast Asia and leading to humans reaching New Guinea and Australia by about 60,000 years ago (implication being you'd certainly have to have been 'behaviorally modern' to fabricate a craft that was capable of 'island-hopping' and crossing many tens of kilometers of open ocean to reach Australia!).  Chapter Five looks at the types of peoples and the timing of the settling of the great interior regions of ice-age Asia and eastern Russia.  Chapter Six tells the story of the impact of the last ice-age in the late-Pleistocene (i.e., the Last Glacial Maximum), that wreaked havoc on the small populations of humans scattered throughout Europe and Asia.  The last chapter of the book is Oppenheimer's take on the peopling of the Americas.  He's of the opinion--based upon archaeology and genetics--that the first 'Americans' arrived between 25,000 years and 22,000 years ago, and that this was followed by a re-expansion of peoples that had occupied Beringia (the huge continent that existed between 25,000-11,000 years ago and linked Asian Siberia with North American Alaska during the run up and through the Last Glacial Maximum).

'So,' you ask, 'having read this fascinating book, what's the upshot?'  Well, first, I can categorically answer that we are all African!  Second, I think the genetic evidence and its most parsimonious interpretations tend to validate and enhance the current "Out-of-Africa" hypothesis for the dispersal of Homo sapiens from eastern Africa around 80,000 years ago.  Third, after reading this book you'll never look at another human being quite the same.  You'll always be thinking about our remarkable kinship, yet more fully understanding the meaning of the differences that exist among the peoples of our world today.  I think it is also important to point out that Dr. Oppenheimer has also very carefully sourced and documented the material he presents in the book with over 50 pages of end-notes.  I strongly recommend reading each of the end-notes too, it made for an even more complete reading experience for me.

Dr. Oppenheimer's The Real Eve: Modern Man's Journey Out of Africa is a grand synthesis of a grand story--our own human origins and subsequent dispersal around the globe.  This book is really the incredible story of how a very small group (1,000-2,000 individuals) from a total population of the approximately 20,000 Homo sapiens that occupied Africa about 80,000 years ago actually got up the gumption to strike out and explore and colonize the rest of the world over the next 40,000 years or so.  Finally, don't be intimidated by the subject matter,  Dr. Oppenheimer is an engaging writer and spends the time and effort to present the material in such a fashion as to be understandable by any reader.  It includes loads of terrific maps and detailed charts illustrating and supporting the genetic evidence and conclusions presented in the book.

In closing, I do want to say that I consider myself more than just a casual student of topics in paleoanthropology and human origins and evolution.  Over my entire adult life I have made a point of staying current with the latest information, via books and technical journal articles, on this intellectually challenging subject, and I can unhesitatingly say that I believe that this is one of the most important books that I've read associated with modern human origins.  This was such a good book that I've gone ahead and found a hardcover edition for my paleoanthropology book collection, as I know that I will be diving into this book time and again in the future.  I highly recommend this book, and feel entirely justified in giving this 'five stars'.

Posted by Christopher at 6:52 PM