Review: "The First Human: The Race to Discover Our Earliest Ancestor" By Ann Gibbons 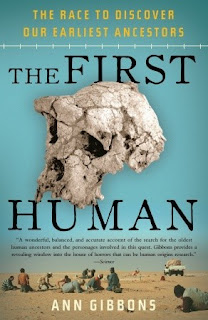 Ann Gibbons has written a very solid and fascinating account of the relative recent discoveries of several of our earliest human ancestors. Gibbons is a well known science writer and brings significant journalistic integrity to her story-telling, as well as significant knowledge of her subject matter.  The First Human: The Race to Discover Our Earliest Ancestors (2006) is the story of the paleoanthropologists behind the incredibly important discoveries of hominin species that are currently some of the oldest yet found, and span a range of ages from 5.0 million years old to perhaps as much as 7.0 million years old.

Gibbons, in telling the story of these discoveries, necessarily focuses much of the book on the out-sized personalities (and, dare I say, egos) of the anthropologists leading the teams exploring various important fossil regions in Africa.  The teams she primarily focuses on in the book include Tim White and his work in the Afar Depression of Ethiopia; Richard and Meave Leakey in the Lake Turkana region of Kenya; Martin Pickford and Brigitte Senut in the Tugen Hills of Kenya; and Michel Brunet and his team in the Djureb Desert of Chad. Each of these teams of highly professional specialists in their respective fields have significantly added to our general understanding and knowledge base associated with the very earliest hominin species found to date, including Australopithecus, Ardipithecus, and two newly identified species, Orrorin tugenensis and Sahelanthropus tchadensis.

Gibbons is quite even-handed in describing the tension and academic conflict that has arisen among some of these researchers associated with the interpretation and meaning of these important fossil discoveries and their role in understanding and explaining human evolution.  Gibbons does a great job of not editorializing or letting her own emotions color the scenes she writes about, and simply factually recounts the stories of the fossil discoveries, the research science that followed, and the resultant back-and-forth academic squabbles that erupted as articles were published and discussed in various academic journals.  As a serious amateur student of paleoanthropology and human evolution, I know that this is pretty much de rigueur, not only in anthropological circles, but among the scientific community as a whole.  All in all, I think that a rigorous and scholarly debate is incredibly healthy and typically results in the advancement of scientific knowledge.  Having said that though, and based upon my interpretation of what Gibbons presents in this book, it is my personal opinion that Martin Pickford--one of the co-discoverers of O. tugenensis--behaved simply deplorably in his much of his dealings with his peers in the academic community over many, many years.

If you're interested in reading about how scientists gear up and conduct scientific expeditions in some very inhospitable portions of the world in their on-going search for the proverbial "needle in the haystack", then I think you'll very much enjoy Ms. Gibbons, The First Human: The Race to Discover Our Earliest Ancestors.  Additionally, if you're specifically interested in learning more about these new, and incredibly ancient, species that have been discovered (i.e., O. tugenensis and S. tchadensis you'll very much appreciate the detail and solid science that Ms. Gibbons provides in telling this fascinating story.

Posted by Christopher at 8:21 PM