Review: "In Search of the Neanderthals: Solving the Puzzle of Human Origins" By Christopher Stringer and Clive Gamble 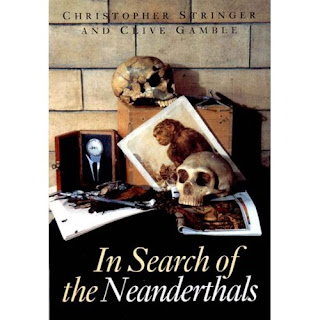 I think that Christopher Stringer, along with Ian Tattersall, are my two favorite writers when it comes to reading books about paleoanthropology and our human origins.  Dr. Stringer's In Search of the Neanderthals: Solving the Puzzle of Human Origins, while somewhat dated (1993), is a fascinating account of the fossil, genetic, ecological, and archaeological data associated with the Neandertals (Homo neanderthalensis) and anatomically modern humans (Homo sapiens).  For many years, almost since the first Neandertal fossil was found in the mid-19th century, it has been thought that modern humans (H. sapiens) were descendants of this earlier hominin species.  We now know that this is not the case.  In fact, it is now clear that at one point in time--about 45,000 years ago--there may have been as many as four different and distinct human species living on Earth at the same time, including the Neandertals, modern humans, and then the very ancient Homo erectus in southeast Asia, and perhaps the diminutive hominin on the island of Flores in the Indonesian archipelago, Homo floresiensis.  [Note that this doesn't take into account the status of the still mysterious "Denisovan" hominin found in one cave in Russia's Altai Mountains, and that appear to be genetically distinct from both Neandertals and anatomically modern humans!]

Much of Dr. Stringer's book focuses on describing the fossil, biological, genetic and archaeological data and evidence that actually distinguishes anatomically modern humans (i.e., us) from the Neandertal peoples.  It is Stringer's contention, and that of much of the paleoanthropological community as well, that anatomically modern humans are not descended from Neandertals, but were a contemporaneous species that shared a common ancestor such as Homo heidelbergensis or Homo antecessor between them and the earlier Homo erectus.

In this book, Dr. Stringer does an excellent job of making the case for an "Out-of-Africa" dispersal for anatomically modern humans that probably began about 90,000-70,000 years ago, and by 45,000 years ago these modern humans, also known as the "Cro-Magnon", had spread into western Europe, the home of the Neandertals for 200,000+ years and ultimately displaced them.  It appears that the modern behaviors (e.g., planning, art, improved stone-tool and shelter technologies, language, etc.) and tremendous environmental adaptability exhibited by these new modern peoples was probably enough to pressure the Neandertals to have to shift to small isolated enclaves at the margins of their former range across much of western and central Europe.  This diminution of their range and inability to adapt ultimately led to the extinction of the Neandertals approximately 30,000-25,000 years ago.

If you're looking for a good one-volume, easy-to-read, treatment of the origins and relationship between our close cousins, the Neandertals, and ourselves, then I highly recommend this book.  Additionally, this volume is profusely illustrated with a terrific collection of photographs that illustrates and supports the fossil evidence for Stringer's contention that anatomically modern humans evolved separately and apart from Neandertals.  Finally, if you want the latest--state-of-the-science--information about our human origins, I strongly urge you to read Dr. Stringer's latest book, Lone Survivors: How We Came to Be the Only Humans on Earth (2012).

In Search of the Neanderthals: Solving the Puzzle of Human Origins
By Chris Stringer and Clive Gamble
Hardcover, 248 pp.
Thames & Hudson, 1993
ISBN 0500050708

Posted by Christopher at 8:06 PM