Review: "The Old Way: A Story of the First People" By Elizabeth Marshall Thomas 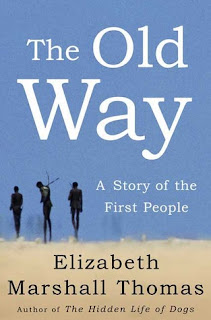 The Old Way: A Story of the First People is an absolutely fascinating account of the !Kung, or Ju/wasi ("The People"), people of the Kalahari Desert region of southwestern Africa.  Elizabeth Marshall Thomas wrote this book in 2006, based upon the many years that she and her family spent with these amazing people starting in the early 1950s.  In fact, Thomas's mother ended up publishing several anthropological monographs through Harvard University describing the !Kung hunter-gatherer lifestyle in this desolate and unforgiving landscape.  Thomas herself, as a young woman, spent several years living with and getting to know the !Kung, and recorded her observations in her personal journals.  Her older brother, John, spent most of his life with these people, working tirelessly on their behalf, and even married a Ju/wasi woman.

Like most people, I'd heard about the "Bushmen of the Kalahari" as a boy, but really had no idea what that meant, or really who these people were.  In a nutshell, the !Kung are an ancient people that have essentially lived a nomadic Paleolithic lifestyle in the Kalahari Desert for more than 20,000 years.  Interestingly too, with the recent completion of the Human Genome Project, we now know that these people are some of the most ancient and genetically diverse anatomically modern humans (i.e., Homo sapiens) on the planet.  If you will, the !Kung peoples are the 'rootstock' of most of us.  And as such, I think a book like that which Ms. Thomas has written is incredibly important for all of us to read and think about.  In other words, this book has the capability of putting us firmly in touch with who we were, and who we are.

The !Kung also speak an incredibly ancient language--one of the African 'click' languages--a mix of phonemes and click sounds made with the palate, lips, tongue, or cheeks.  Linguists believe that the click language that the !Kung speak is at least 60,000 years old, and may rank as one of humanity's oldest existing languages.  In reading this book I discovered that utilizing a click language actually makes great sense when living and hunting in a dangerously hostile environment like the Kalahari, as the click sounds tend to blend in and sound more 'natural' and don't alarm prey or alert potential predators like spoken words can.

Ms. Thomas starts off talking about the relationship of these people to the 1,500 centuries, or more, of modern human existence; and up until the mid-1960s, not much had changed from the way our Paleolithic ancestors lived some 60,000-70,000 years ago.  She then described the complex relationship that the !Kung had with their environment and the animals that occupied the Kalahari and that the people depended upon for meat.  The heart of the book is that these were peoples that were completely connected to the habitat and ecology around them.  They intimately understood the habits of all of the animals and and habitat preferences and uses for the plant species of the savannah and desert. Ms. Thomas describes in fascinating detail how plants are gathered and used among the people, marriage and the importance of lineage, how children were raised, how animals were hunted, religious and mythological beliefs, the interactions and social fabric of the family dynamic and small collections of families that lived and migrated together.  There is even a whole chapter on the relationship of the !Kung with the top predators of the Kalahari, African lions, leopards, and spotted hyenas.

Inevitably though time and the new way of human life caught up to this remote corner of the world, and Thomas reports that by the 1990s most of the Bushmen, including the !Kung, had been forced off of their natural ranges and now live in government-sponsored shanty towns and have largely given up their hunter-gatherer subsistence lifestyle.  And similar to what has happened to many Native American peoples in the United States, it has been a very difficult transition for many of them in trying to adapt to the new ways of 'modern' living.  It made me sad to think that these people, so lovingly described and respected by Ms. Thomas in this book, really no longer exist.  Sure, there are still Bushmen living in southwestern Africa near their old homelands in the Kalahari Desert, but they're not living "The Old Way" as the "First People" any longer, and that, I think, is a loss for all of humanity.

In conclusion, I highly recommend this book, and count it as a non-fiction favorite read for 2013, and is certainly a book that I will undoubtedly revisit sometime in the future.

Posted by Christopher at 8:28 AM