Review: "The Neanderthal's Necklace: In Search of the First Thinkers" By Juan Luis Arsuaga (translated by Andy Katt) 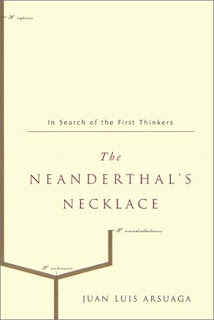 Juan Luis Arsuaga's The Neanderthal's Necklace: In Search of the First Thinkers (2002) is an excellent and compelling addition to my collection of paleoanthropological books.  Dr. Arsuaga is a Spanish anthropologist and has spent much of his career at the famous archaeological sites at the Sierra de Atapuerca.  He and his team are known for discovering the largest collection of pre-Neandertal hominins--some 2,000 human fossils, comprising maybe as many as thirty-two individuals.  According to Professor Arsuaga, all of these fossils are likely an ancestral species to both the Neandertals (Homo neanderthalensis) and anatomically modern humans (Homo sapiens), and are classified as either Homo heidelbergensis or Homo antecessor.  This human species occupied the Iberian peninsula and other portions of western Europe for a very long period of time, from approximately 780,000 years before present to perhaps 130,000 years before present.

What Professor Arsuaga accomplishes in this book is to eloquently tell the history of the early human species that occupied western Europe, especially the Iberian peninsula from the Middle Paleolithic through the early Upper Paleolithic and the extinction of the Neandertals.  What I particularly appreciated was Dr. Arsuaga's melding of the data associated with regional climatic and ecological conditions in telling the story of these early hominin species who occupied these habitats so many millenia in our past in Spain during those fluctuating periods of extreme world-wide glaciation and interglacials.  Over the years that I have been reading books and technical papers about human origins, I have come to better understand and appreciate that data and information associated with the effects of global and regional climate change and regional ecological conditions are every bit as important as the fossil and genetic evidence.

Personally, I think Professor Arsuaga's book, The Neanderthal's Necklace: In Search of the First Thinkers, is an important book and goes far in helping fill in the details about our human origins between what we currently know about the dispersal of Homo erectus from Africa between approximately 1.5-1.2 million years ago, and the arrival of fully-functioning anatomically modern humans (Homo sapiens) in western Europe about 45,000 years ago.  I also strongly suggest that Professor Arsuaga's book makes an excellent companion to Clive Finlayson's relatively recent (2010) book entitled, The Humans Who Went Extinct: Why Neanderthals Died Out and We Survived.  In reading both of these books, the reader will come away with a clear understanding of the role of the early hominin species in western Europe and the role that climate change and ecological conditions played in ultimately reaching the point that only one human species--Homo sapiens--remained on the planet.

Posted by Christopher at 7:51 PM