Here we are just a few days removed from "Remembrance Day" (UK) and "Veteran's Day" (US), and somehow it seems highly appropriate that I have just finished reading a new book-length poem entitled, Memorial: An Excavation of the Iliad, by the British poet, Alice Oswald.  Oswald's poem deeply affected me in a fashion similar to that that has occurred upon each of my visits to the Vietnam Memorial on the Mall in Washington, D.C.  Now, let me see if I can explain why.

First of all, let me make myself clear, that while war, it seems, is a necessary evil and has been with us since the dawn of Humanity, this post is not about the morality, or immorality, of war.  What I want to briefly focus on is the human cost, and how that cost is recorded and remembered, i.e., memorialized.  Many countries have special days that commemorate their war dead, battles won, or wars fought.  Most countries have physical monuments or memorials too, from the small monuments in village squares or parks, to those grand and elaborate national monuments typically found in capital cities.  There's another type of memorial that some of us encounter through the course of our lives, and that is through the literature we read.  For example, many of us have read Stephen Crane's The Red Badge of Courage, or Willa Cather's One of Ours, or Erich Maria Remarque's All Quiet on the Western Front, just to name a few; and they all, to one degree or another, describe the horrors and futility of war, and memorialize, if you will, its impacts upon the combatants.  Over the ages, poetry has also been effectively utilized in a similar fashion, and one of the very first poems to deal directly with war and its costs is The Iliad by Homer.  This is the subject of Alice Oswald's poem, Memorial. 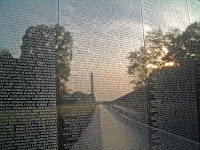 The poem starts with eight pages of a list of names--214 names--all in uppercase.  This is a listing of each death described by Homer in The Iliad and presented in the chronological order in which it appears in the poem.  It is staggering to slowly come to the realization that Homer has described 214 individual combat deaths through the course of nearly 16,000 lines of poetry.  To see that long list of names, on page after page after page, could not but help instantly transport me to the National Mall to stand in front of the Vietnam Memorial looking at the chronological ordering of the 58,272 names (all in uppercase too) of those who lost their lives during the Vietnam War from 1959 through 1975.  Oswald's listing of these names, one after the other, is an incredibly powerful and visceral mechanism for instantly engaging her reader.  There's none of the bickering between Achilles and Agamemnon here, the speech-making of Odysseus, or even the divine intervention of the gods.  Nope, Oswald instantly starts the reader off with the stark and undeniable cost of that messy little war on the Trojan Plain--in human lives.

And on and on it goes.  After the list, Ms. Oswald moves straight into her poem, and what she has done is eloquently embrace and adapt Homer's vignettes of information that he provides in the poem about many of the men that are killed.  A poignant example of the grace and sensitivity that Oswald brings to telling the story of these dead men is in the first one--

Whew!  In twelve concise lines we see a man with a life in a pastoral land that was his, he had a house (half-built), and a wife, and then he sailed off to war with his men and his brother.  And then he is dead.  Sounds eerily like the story of the men that sailed off and then participated in the Normandy Invasion on D-Day, and now lie in the earth near the Omaha Beachhead.

Oswald's Memorial respectfully, even reverently, yet relentlessly brings the reader front-and-center with each of the deaths in Homer's epic, through the slaughter that Diomedes wreaks upon the Trojans in Book 5; the death of Zeus' beloved son, Sarpedon, at the hands of Patroclus in Book 16, quickly followed by Patroclus' own death; and culminating with the last death, that of the Trojan great, Hector, killed by Achilles in Book 22.  In between these more 'famous' deaths are all of the others, one after the other, after the other.  Also, in an effort to provide a momentary respite or interlude from the carnage of killing and death, Oswald has masterfully utilized her own version of Homer's similes.  These similes, always presented twice consecutively, give the reader a well-needed moment for pause and internal reflection.  At times, Oswald's lines of poetry are humorous, and then others are unbearably sad.  This is, I think, a poem about life at the moment of death--a celebration of the life, and a memorial to the death.  Oswald herself says that the poem is like something "from the Greek tradition of lament poetry", and that her poem presents The Iliad as "a kind of oral cemetery...an antiphonal account of man in his world."  Maybe it is fitting that I close this review with the death of Hector "Breaker of Horses"--

Just as Homer lovingly describes the intimacy of the feelings between the Trojan husband and wife (Book 6), Oswald's modern verse reinterprets those hopes, desires, and fears within Hector's death scene in a few starkly spare lines in such a fashion that one almost feels as though you are standing there witnessing his last living moments.  It is powerful stuff!  This is experiential poetry in the truest sense, as Oswald forces the reader to confront one of the primary elements of The Iliad--Men killing, and Men dying.

I have a shelf that contains seven different translations of Homer's The Iliad, as well as the three thin volumes of Christopher Logue's brilliant poetic reinterpretation (discussed here), and David Malouf's gorgeous little novel Ransom (reviewed here).  Alice Oswald's beautifully moving poem, Memorial, will be joining that company, as a monument to those 214 men who died on the Scamander Plain nearly 4,000 years ago.  Somehow, I think Homer would see this as quite fitting.

Posted by Christopher at 9:54 PM