A Bit of Prose on Prosody--Part 1: The Structure of Poetry--Meter & Line 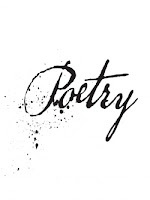 'News Flash!'--I like poetry.  That certainly won't come as much of a surprise to any even casual readers of ProSe.  In fact, I tend to view poetry as the highest literary art form.  While I can honestly say that I always 'liked' poetry, even as a grade-schooler, it wasn't until I really started reading and studying poetry that I truly began to love poetry.  I currently have something around 100 volumes of poetry, including a few anthologies, sitting on my bookshelves.  I tend to read as much poetry each week as I do other literary forms.  While it isn't particularly popular in the realm of the book-blogosphere, I like to post poems that I like or describe poets and their works that I have recently discovered.

As some readers are aware, I recently started a regular weekly project featuring the poetry of Emily Dickinson (see my postings associated with The Dickinson Project), and in those postings I describe and discuss not only her beautiful poems, but also try and focus on Dickinson's interesting poetic techniques, as well as the craft of poetry itself.  I am also getting set to start another regular weekly project focusing on the 154 sonnets written by William Shakespeare.  I am very excited about both of these projects, as they involve two poets that are especially near and dear to my own heart.

It struck me though, that it might be useful to spend a little bit of time and talk about the "science and art of poetry"--also known as Prosody.

So, the remainder of this post is going to 'wax prosodic' and discuss some of the primary elements associated with prosody.  It is my hope that by having a better understanding of some of the terms and definitions associated with the different types of poetry, the structure of a poem, as well as the craft of poetry itself will help some readers gain a new appreciation for this beautiful literary art form.

Simply put, I would define a poem as an arrangement of words in a rhythmic fashion that expresses one's thoughts, feelings or ideas, and often incorporates the use of meter, metaphor, and may involve the use of alliteration, rhyming or other schemes.  I'm quite sure that there are other (and probably better) definitions of what a poem is out there, but this will suffice for my purposes.

I think that the logical place to start is with the structure of a poem.  A poem is generally comprised of lines of words arranged in such a fashion to take advantage of latent rhythms associated with the syllables and stresses in those words.  This gets us to meter.  Meter can be thought of as the quantitative measure of the rhythmic quality of the line of poetry being looked at, and is really just the organized succession of syllables at quasi-regular intervals in the line.  The unit of measure is known as the metrical foot.  The foot is typically associated with the accented syllable, and the number of feet in a line then yields the meter used in that line.  For example, five feet in a line of poetry is known as pentameter, and is a very common form in English poetry.  Homer's ancient Greek sets up well for hexameter, i.e., six beats-per-line, and this was what Homer used for The Iliad.  Not that I would know first-hand, but apparently it is fairly difficult to translate the poem from the original Greek and present it in hexameter in English.  Anyway, it is theoretically possible that one could have poems written in monometer, dimeter, trimeter, tetrameter, and so forth.  The old Norse and Icelandic 'saga' poetry (e.g., Poetic Edda) is a pretty good example of poetry that was largely written in tetrameter, i.e., four-beats-per-line, and it is generally often alliterative too (more on that later).  Generally though, the poetry that an English-speaking reader will commonly encounter today will include the following metrical types: no meter (i.e., free verse), tetrameter, pentameter, and hexameter.

I also want to spend a moment or two on the different types of metrical feet that one can encounter being used in poetry.  It gets a little complicated here, but bear with me and I'll do my best to make sense of it all.  Apparently, there are twenty-eight different types of metrical feet that have been utilized in poems written over the ages.  Fortunately, in the English-language poetry that is typically written and read there are five types of poetic feet, and include the iamb, anapest, trochee, dactyl, and spondee.

An iambic metrical foot is the most common foot, and consists of two syllables, a short or unaccented syllable followed by a long or accented syllable.  For an example, I am going to use the first line from John Keats' Ode to a Nightingale--


"My heart aches, and a drowsy numbness pains"

The bolded words, or letters, indicate the stressed syllables.  As we have five unstressed/stressed pairs in this line of poetry, we are looking at a classic example of "iambic pentameter".  See, its not so hard.

An anapestic metrical foot is made up of two unstressed or short syllables followed by one long or accented syllable.  Here's an example you'll quite likely recognize--


"Twas the night before Christmas and all through the house"

Again, the bolded words or syllables indicate the end of the anapestic foot; and as we have four anapests, this is a line of "anapestic tetrameter".

The trochee, or trochaic, metrical foot is simply the long or accented syllable followed by the short or unaccented syllable.  The Dies Irae of the Latin requiem mass is a great example of the use of trochees--

So, what we have here is an example of "trochaic tetrameter".


"This is the forest primeval. The murmuring pines and the hem locks"

The first five metrical feet in the line are dactylic, with the last dactyl followed by a "spondee", which is our final 'foot' to be defined.

A spondee is a metrical foot with two long or equally accented syllables, e.g., "bread box" or "shoe shine".  Given the nature of a spondee, it really makes no sense to actually construct a poem made up entirely of spondees.  Typically, spondees are used in an anapestic metered poem, and can emphasize or enhance the meaning of words in a line.  Here's a one-line example of the use of spondees from Tennyson's In Memoriam: A.H.H.--


"When the blood creeps and the nerves prick"

Well, this is probably enough for now.  I hope that this very brief description of poetic meter and the more commonly used metrical feet was interesting, and may be useful as you read the next poem that you encounter.

I do hope you'll stay tuned, as I plan to cover "stanzaic" and "verse" forms and some other interesting poetic schemes and techniques in my next posting.

For those of you getting an early start on the Thanksgiving holiday, please travel safely and have a wonderful holiday.  I hope you are able to get some good reading in, and throw that volume of Keats or Tennyson in the book-bag too.

Posted by Christopher at 7:29 PM