A Poem for the Day: "In the Forest" by Anna Akhmatova

Four diamonds--four eyes,
Two of the owl's and two of mine.
Oh, frightful, frightful the end of the tale
About how my bridegroom died.

I lie in the grass, it is damp and luxuriant,
My words unconnected sounds,
And above peers such an important,
Attentively listening owl.

The fir trees hem us in,
Over the sky--a black square.
You know, you know, they killed him,
My oldest brother killed him--

Not in a bloody duel,
And not in battle, not in a siege,
But on a deserted forest pathway
When my bridegroom was coming to me. 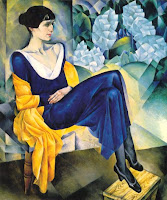 Another poet that I'm choosing to feature on A Poem for the Day is the Russian Modernist, Anna Akhmatova (1889-1966).  I have always loved her poetry and have a 'chunkster' volume of her poetry, The Complete Poems of Anna Akhmatova, translated by Judith Hemschemeyer (Zephyr Press, 2000).  I love poets that tell a story with their poetry, and Akhmatova is good for that with In the Forest.

On its surface, In the Forest is a dark, forbidding, and tragic little poem, and just a little bit creepy too.  It leaves the reader with an unsettled feeling and wanting to know more.  I simply have to think that this poem is the result of an old Russian or Ukrainian folk-tale that Anna heard, or knew of.  It just has the feel of something out of Grimm's Fairy Tales.  There may even be a political or artistic undercurrent running through the poem too, I just don't know at this point.  This was written in the last years of the Czar's rule, which was a period of growing political unrest in Russia.

In 1910, Anna Akhmatova, in conjunction with the poets, Osip Mandelstam and Sergey Gorodetsky, formed the Guild of Poets (also known as the Acmeist movement; from the Greek word 'acme' = the 'best age of man'), a loose confederation of poets that met and discussed their art-form in "The Stray Dog Cafe" in St. Petersburg.  These poets were interested in promoting the actual craft of poetry rather than the inspiration or mystery behind the poem, and in using "concrete" themes rather than the nebulous or "ephemeral world" of the Symbolists.

I plan to post and discuss more of Anna Akhmatova's poetry, as well as more information about her life, and how the Russian Revolution in 1917 and subsequent life in Soviet Russia influenced her poetry over the course of the rest of her life.  For example, in 1921, her former husband, Nikolay Gumilev, was executed for ostensibly being part of an anti-Bolshevik conspiracy.  Anna, and her son, Lev, were persecuted by Soviet authorities until well into the 1950s when the Soviet literary establishment finally began to recognize her importance as a poet.  Anyway, more to come over the next few weeks about this fascinating woman and wonderful poet.

Finally, the beautiful portrait of Anna Akhmatova that I have attached to this posting was painted in 1914 by Nathan Altman (1889-1970), a Russian avant-garde artist.  Altman, like Akhmatova, was born in what is now the Ukraine, and attended the Art College in Odessa.  In 1910, Altman moved to Paris and studied art with other Russian expatriate Russian artists (e.g., Marc Chagall, Vladimir Baranov-Rossine, Alexander Archipenko, et al.).  One can certainly see the influences of Cubism in Altman's painting of Akhmatova.

Posted by Christopher at 1:44 PM