If you plan to read Homer's The Iliad or The Odyssey, or any of the great plays of the Greek classicists, I have a suggestion for a book that will prove to be indispensable to you on your journey through these great works of literature.  Robert Graves (1895-1985), the British poet, translator and novelist, produced some 140 works.  He is probably best known for his novel, I Claudius, and his historical study of poetic inspiration, The White Goddess.  In the late-1950s, he also completed a two-volume compilation and analysis of Greek mythology.  In this posting, I am reviewing the 1992 Penguin soft-cover edition entitled, The Greek Myths--Complete Edition.  It is encyclopedic in content, organization and structure, as well as size as it is nearly 800 pages in length.  It is my humble opinion that this really may be the very best desk reference on Greek mythology that is available.  I did quite a lot of research, on-line and in the bookstores, before I made the decision to buy a copy of Graves' book, and I really couldn't be more satisfied.

Graves starts off, rightly so, with the early Pelasgian creation myths that tell the stories of the creation of the Universe, the Titans, Titanesses, and the first man, Pelasgus.  Graves compares the early Pelasgian creation myths with the later Homeric, Orphic, and Olympian creation myths, and from there the reader is 'off to the races.'  Graves takes each myth--from the Creation through Odysseus' homecoming at the end of The Odyssey--and provides a synopsis of all of the variations, includes a comprehensive set of bibliographic citations associated with the source(s) for each myth and its variations, and then follows that up with detailed set of explanatory notes and comments.  Frankly, it is just this organizational structure that makes this book priceless, in my opinion.  Now, does the book lend itself to sitting down and reading it straight through, cover-to-cover?  No, not particularly.  I did, but then I wanted to read each myth--all 171 of them--as some of them I wasn't familiar with at all.  Having done that though, I can honestly say that I am completely convinced that Graves' organizational scheme in this reference book is nothing short of brilliant.  I am also completely comfortable navigating my way around the book, starting from either the table of contents or index, reading the actual myth(s), the source citations, and then exploring Graves' notes and comments.  In summation, I'd say that Graves has taken a scholarly approach in his presentation of the myths, documenting sources, and with his explanatory notes and commentary.  Having said that though, I also maintain that this is still an enjoyable and eminently readable book, and one that you could pick up and open to any page and start reading and just lose yourself for an hour or two.

There's another fascinating aspect of this work that I want to highlight.  While Graves, in this volume, has collected and compiled the myths and stories of the ancient Greeks, he is obviously very interested in the genesis and spread of these myths through time and across cultural boundaries.  Consequently, Graves spends a lot of time and commentary on an etymological analysis of words (no matter how arcane or archaic) in establishing relationships between, for example, some of the creation myths emanating from Sumer (e.g., the Epic of Gilgamesh), or the variations of similar myths found in Celtic regions of western Europe.  This makes sense to me too; as peoples, with their customs, beliefs and ideas, were surely moving about and interacting with one another.  Now, whether one buys into all of the notions put forth by Graves in his commentaries, I'll leave that up to each reader to make up his or her mind, but I think he's on to something here--like I said, it just seems to make sense. 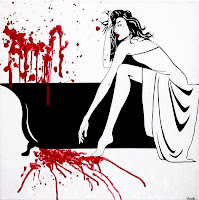 I think that the myths of ancient Greece are important, and will continue to be.  They are some of the foundational building blocks of much of the great literature, art, and music that we all love and appreciate today; and, as such, they are an important part of our cultural and spiritual heritage as human beings.  They continue to provide artistic and philosophical inspiration to us in our lives, from the likes of John Keats' great poems Endymion and Lamia, or the Daphnis et Chloe ballet musical score by Maurice Ravel, to modern graphical renditions of Agamemnon's murder at the hands of his wife Clytemnestra while in his bath, such as that by 'baudelaire999' at left.  Graves' The Greek Myths--Complete Edition will help you make sense of these daily encounters with Greek mythology, and I hope will leave you looking for more.  I highly recommend having a copy of Graves' book on your bookshelf, right next to your dictionary, thesaurus, style guides, and poetry anthologies.  Its a keeper!  As the inveterate bibliophile that I am, I am now on the lookout for a hardbound copy of this wonderful book in two volumes, as it was originally published.

Posted by Christopher at 1:22 PM