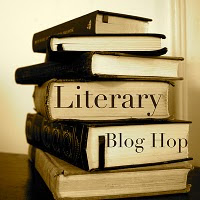 The "Literary Blog Hop" is a monthly feature of the ladies over at The Blue Bookcase.  This month's question comes from The Reading Life and is--


"If you could invite any three literary figures from different eras to Sunday dinner who would they be?"

What a great question!  The first thing that immediately came to mind was that this reminded me of that wonderful quotation from Virginia Woolf--


"Who would not spout the family teapot in order to talk with Keats for an hour about poetry, or with Jane Austen about the art of fiction?"

Well, okay, since Keats and Austen already have invitations to Ms. Woolf's party, I can't very well invite them to mine.  Who would I invite?  Hmm, decisions... 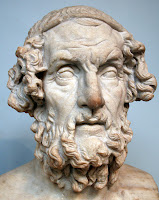 Homer.  Yes, the Homer of The Iliad and The Odyssey fame.  That itinerant blind bard of ancient Greece that left the world some of the greatest stories ever told as the epic poetry that has been translated into so many languages and read and marveled over for nearly three millenia.  I'd love to learn more about his story-telling and the bardic oral tradition that ultimately resulted in these tales becoming such a significant part of the Human literary legacy.

Emily Dickinson.  The 'Belle of Amherst' may have been quiet and even painfully shy, but there was a nuclear reactor's worth of power contained within this woman's genius that was able to, through the use of a few simple joined words, create a body of nearly 1,800 poems that perfectly pulsate and throb with Life and showcase, as Helen Vendler puts it, Dickinson's "...startling imagination and the ingenuity of her linguistic invention."  This little woman's poetry has resonated and stayed with me my entire life!

Anne Carson.  My third dinner guest would just have to be the Canadian poet and translator, Anne Carson.  While I have only read Carson's translations of Aeschylus (Agamemnon), Sophocles (Elektra), and Euripides (Orestes) imaginatively conflated into her An Oresteia (Faber & Faber, 2010).  Her interpretation is modern, lyrical, and quite powerful. To me, Carson's Agamemnon is bleak, dark, and sinister; and one can't help but be astounded with the power and rage exhibited by Klytaimestra and the penetratingly prophetic and haunting voice of Kassandra.  I want very much to read Carson's translations and thoughts on the fragments of poetry by the ancient Greek female poet, Sappho, as well as Carson's own volume of poetry entitled, Glass, Irony and God (1995).  I love her voice, it just speaks to me.  From my own contemporary perspective, Carson is up there in the exalted 'thin air' with the likes of A.S. Byatt and Margaret Atwood.

Although not specifically asked for, my fourth dinner guest would be my oldest daughter who is finishing up her Ph.D. in English at the University of Nebraska in Lincoln, Nebraska.  She is a brilliant, independent-minded woman with great ideas and a tremendous future ahead of her.  Now, I think I'll just serve the meal, pour the wine and sit back and enjoy the conversations.  Check back with me in a few hours.