A Poem for the Day: An Excerpt from Euripides' "Ion"

As you rise early some morning while it is still dark out, go outside and sit quietly in your favorite spot and as the dawn comes you might have a moment like this--


"Dawn's gleaming horses raise
the blazing sun above the earth 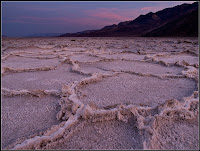 up through air steeped in fire
where light on light routs
the faint lingering stars
into the sacred dark.

The peaks of Parnassos, untrodden,
flare, smolder, and take for us
this day's charge of sun.
Smoke of desert myrrh
rises to the rooftop,
shrine of bright Apollo.

Inside, the priestess sits,
at the sacred tripod,
crying to the Greeks
songs Apollo murmurs in her."

Isn't this just lovely?  This bit of poetry is Lines 71-86 from Euripides' play Ion that was written between 412 and 410 B.C.  The lines are spoken by Ion, a temple servant in the Temple of Apollo in Athens.  Ion turns out to be the son of Apollo and the Athenian queen, Kreousa.  She abandoned the infant child after his birth, and he was spirited off by Apollo and placed in the temple.  There's much more to the story, as one can imagine, but I just wanted to share these beautiful lines about the dawning of a new day.

The photograph I've attached is one I took a couple of years ago just before dawn at Badwater Basin in Death Valley National Park.  The polygonal structures in the foreground are a closeup of the thick crust of salt that covers this basin which is some 282 feet below sea-level.  Truly a weirdly beautiful landscape.  Please feel free to click on the photograph for a larger view.
Posted by Christopher at 9:07 AM