Review: "Tess of the d'Urbervilles" By Thomas Hardy

I have almost finished reading much of the major fiction of Thomas Hardy this summer.  I just completed a re-reading of Tess of the d'Urbervilles.  As I recall, the last time I read this novel was in the mid-1970s while I was in the U.S. Coast Guard.  All I can say is that this has to have been one of the most intense novels that I believe that I've ever read.  Reading this book rivals the literary and emotional experiences I have had with Hardy's The Return of the Native, Charlotte Bronte's Villette, Dickens's Our Mutual Friend, and Tolstoy's masterpiece, Anna Karenina.  In my opinion, Tess of the d'Urbervilles is one of the monumental literary achievements of the entire Victorian Era.  A stunning novel!

A tragedy in six parts, Tess of the d'Urbervilles is set in Hardy's fictional Wessex in southwestern England.  The novel follows the beautiful Tess Durbeyfield from the age of about sixteen until she is about twenty or twenty-one.  The story's plot revolves around Tess and the two men that feature prominently in her life; the first is Alec Stoke-d'Urberville; and the second, Angel Clare, is the youngest son of a country parson.  Like in all of Hardy's novels, names are everything.  For example, it turns out that even Tess's name, 'Durbeyfield,' is simply a corruption, over time, of the name of her noble d'Urberville ancestors who now reside in their stone vaults in the church-yard in Kingsbere.

With all the recent reviews of Hardy’s novels that I have written this summer I am sure that I am beginning to sound like a broken record, but Hardy’s descriptions of the pastoral lives of the Wessex simple folk are ever so beautiful and enchanting.  With his descriptions I always feel like I am right there experiencing the moment with the characters of the novel.  Even in the scenes loaded with human drama and pathos there is always the touchstone to the natural environment.  Hardy’s literary signature seems to be his ability to relate, and even bind together, the natural environment with the environment of real human emotion.

This is a novel of double-standards and sacrifice and the young and noble Tess is the unfortunate recipient of the negative consequences associated with the actions and feelings of both Alec and Angel.  Tess becomes, if you will, the Magdalen continually seeking redemption from those who probably can't, or won't grant it.  Based upon Hardy's own view of the Victorian society, it was highly unlikely that the Magdalen could be absolved or redeemed, and I believe that that realization must have affected him profoundly.  In reading this novel, I have come to believe that Hardy loved Tess more than any other woman that he "invented" and wrote about; you can almost feel his love for this "pure woman" emanating from each page.  Hardy wrote in one of his notebooks in 1895 that “Love lives on propinquity, but dies of contact.”  For me, this relatively short sentence completely illuminates the common thread and theme that links every one of Hardy’s novels and much of his poetry.

Symbolism, visual imagery, and allusion are all deftly used by Hardy as this 'folk tale' is recounted; and at times it does feel like a nightmarish and horrifying folk tale told around the fire on a dark and stormy night.  There are numerous references to Milton's Paradise Lost, the Book of Genesis, and several of the Pauline letters of The New Testament.  This is a harsh and unforgiving world that Tess finds herself in, with 'Punishment' the watchword and little in the way of 'Hope' or 'Happiness' looming on her horizon.  Mixed with the religious, there are also numerous examples of pagan symbolism and rituals; all of which contribute to the colored pigments that Hardy has applied to the canvas of Tess's life as the sacrificial victim of her society. 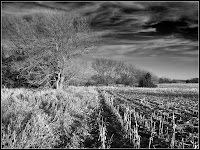 Having now read most of Hardy's novels, and a good number of his short stories, I can make the observation that Hardy likes to include a 'witch' in his tales.  There are good witches and bad witches, but they are all here in Hardy’s Wessex, including: 'Bathsheba Everdene' (Far From the Madding Crowd); 'Eustacia Vye' (The Return of the Native); 'Lucetta Le Sueur' or ‘Elizabeth Jane’ (The Mayor of Casterbridge); 'Felice Charmond' (The Woodlanders); 'Tess'; and, finally, 'Sue Bridehead' and ‘Arabella Donn’ (Jude the Obscure).  Think about it for a momentl; but each of these women absolutely bewitches and intoxicates one or more of the male characters in each of the novels; generally with tragic and disastrous results.  And Tess is no different.  Both Alec and Angel are completely besotted with Tess, and almost continually blame her for being a 'temptress'; the 'Eve' to their 'Adam.'

I have to say that both, Alec and Angel, infuriated me to no end throughout much of the novel.  While Tess, with her simple ways and innocence, makes bad decisions (with Fate's kind help, I might add), these two men are the basest, most cowardly and hypocritical, and end up becoming two of the most despicable male protagonists in fiction, in my opinion.  Each of these men, at numerous times, could well have done the right thing and brought Tess salvation and full redemption, as well as given her the love and affection that she so desired and deserved.

Finally, even when Angel Clare comes to his senses and realizes what Tess is, and what she means to him, it is Tess, herself, that says, near the end, "It is too late...Too late, too late!"

For Tess it truly is too late!

Now it is on to Jude the Obscure.

[My review was based upon the Everyman's Library hardcover edition of Tess of the d'Urbervilles, published in 1991 by Alfred A.Knopf.  The black and white photograph accompanying this review was taken by me on Christmas Eve in 2006 in a cornfield near my daughter's home in Lincoln, Nebraska.  Somehow, this image reminds me of the fields and tree-lined borders of Hardy's Wessex countryside.  'Click' on the image for a larger view.  Enjoy!]

Posted by Christopher at 1:06 PM