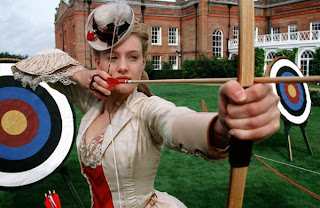 I have just finished a leisurely eight-week group-read of George Eliot's last completed novel, Daniel Deronda, with my 'Anglophiles Anonymous' group on Shelfari.com.  I very much enjoyed the experience of reading and discussing the book, section by section, each week.  I am convinced that I got so much more out of it this way than if I'd read it by myself.  Without the incentive of the group-read, I am also quite sure that this is a novel that I probably would not have even acquired, much less read.

The novel, first published in 1876, is quasi-Tolstoyan in scope and complexity.  It has a whole raft of fairly interesting characters that border on being 'Dickensian.'  While written in her characteristic style of 'social realism,' Eliot uses some quite elegant and sophisticated literary and plot devices too.  For example, she is adept at using flashbacks to bounce characters and events back and forth in time.  She also runs dual storylines through much of the novel, that are quite divergent at the beginning, but close in a relatively satisfying convergence near the end.  Her use of allusion, allegory, and metaphor is deft and appropriate.  Eliot, in writing this novel, is clearly didactic, without being overtly 'preachy' or academic like Tolstoy (e.g., Anna Karenina) or Victor Hugo (Les Miserables).

In some respects, for much of the first half of the novel I found myself more interested in the character and plot-threads associated with Gwendolen Harleth versus that of the eponymous Daniel Deronda.  Gwendolen reminded me, at various times, of Jane Austen's 'Emma' or even Eliot's own 'Dorothea Brooke' (Middlemarch).  With the convergence of Gwendolen's storyline with that of Daniel's, I did find that Daniel's story and character became much more compelling and interesting.

All in all, this is a novel about double-standards, redemption and balance.  Eliot provides a fascinating portrait of the situation and lives of English and European Jews during the Victorian period, and particularly the nascent proto-Zionist movement and her interpretation of the Kaballistic philosophy.  Eliot balances this portrait with a similar examination of the ways and social mores of the well-established English upper class.  Eliot pulls off this balancing act superbly through having the novel's primary male protagonist, Daniel Deronda, having a foot in the both worlds.  I was also completely taken with the intelligent young Jewish woman, Mirah Lapidoth.  From her introduction, early on in the novel, I eagerly looked forward to each of her appearances.  The Meyrick family, especially Mrs. "Little Mother" Meyrick and her vivacious daughters, are splendidly wonderful characters as well.  The novel also contains some characters that you simply love to hate, and others that you hate to love.  Ambiguity and shades of gray abound.

In conclusion, I enjoyed reading George Eliot's last novel, Daniel Deronda, very much.  I can say, however, that it did not affect me in the same visceral and emotional sort of way that her earlier books have; specifically, The Mill on the Floss, or Silas Marner.  I could also tell that writing Daniel Deronda and telling this story was somehow quite important to George Eliot, and for that reason alone I am glad that I read it.  While perhaps not as monumental as her Middlemarch masterpiece, this is a big and meaty novel and well worth reading.  Four out of five stars for me.

Posted by Christopher at 6:56 PM