Review: "A Pair of Blue Eyes" By Thomas Hardy

This was a fast read, and I very much enjoyed it!  If you are already a Hardy fan, I heartily recommend reading A Pair of Blue Eyes (1873); if you aren't, this just might make you one.  A Pair of Blues Eyes was the third novel published by Hardy, and the first published under his own name.  In his later years, Hardy created three categories in which he placed all of his fiction.  The largest category, "Novels of Character and Environment," includes the well known core of his oeuvre also known as the Wessex Novels; this novel falls in Hardy's second category, the novels of "Romance and Fantasies; with the third category, "Novels of Ingenuity," containing just three relatively minor works.

A Pair of Blue Eyes is set in Hardy's fictional 'Wessex' of southwestern England; and, in fact, this novel is largely played out in 'Lower' and 'Off Wessex,' in reality that part of England referred to as Cornwall with its rural countryside and majestic sea-cliffs.  As is typical of Hardy's prose, the novel does a wonderful job of connecting the reader with the characters and the character's place in the natural environment.  Every time I read a Hardy novel, or short story, I have this over-whelming feel that I am experiencing the sights, sounds, smells and emotions of the characters that he is writing about.  The reader can't help but fall in love with his pastoral scenes; feeling the breezes at it ruffles the leaves on the trees, and watching the hay-grasses waving back and forth in the fields and meadows.  Hardy involves his reader, time and again, in the simple things like watching the sun set in all of its orange, red, and purple glory, or the glimmer of the stars and planets as they brighten in the darkening night sky.  I think it is this deep connection with environment and the passage of time that seems to make the human elements and aspects of Hardy's stories resonate even more strongly with me.

Through Hardy's fiction, I find another example of my own understanding that the individual human experience and existence is nothing more than a infinitesimally tiny blip when compared to the history and time-line of the Cosmos; but that it also makes my understanding of those brief experiences we have with one another, and the emotions that we feel, so much more important and interesting. 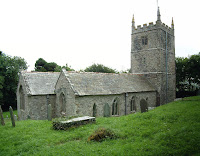 In A Pair of Blue Eyes, Hardy addresses the well-trod literary ground associated with class-consciousness and its effects on courtship and Love.  The novel's primary protagonist, Elfride Swancourt, the beautiful daughter of the local parson, struggles with becoming a woman and experiencing romantic feelings for the first time when she meets the young architect, Stephen Smith, upon his visit to 'Endelstowe' to begin restoring the old parish church.  It is generally considered that much of the courtship between Stephen Smith and Elfride Swancourt is based upon Hardy's own courtship of Miss Emma Gifford, whom he later married in 1874.  Like his character, Stephen Smith, Hardy was also trained as an architect, and undertook a trip to Cornwall to help restore the parish church of St. Juliot in Cornwall (see photograph, at left).

[In the spirit of full-disclosure, I am inserting a Mild Spoiler Alert here.  If you are one who wants no hint of plot direction or details, I suggest that you scroll past the next paragraph and two block-quote sections]

Suffice it to say that the novel is not just a simple little tale of young blossoming love set in the quiet bucolic countryside.  There is plenty of drama, passion, and intrigue involving various characters of all class levels of English life in the mid-Victorian period in Hardy's telling of Elfride's tale.  During the initial serialization of the novel, the term "cliff-hanger" was coined, referring to one of the more exciting events that occurs on the precipice of the 'Cliff without a Name.'  One of the characters is literally hanging by his fingertips on the edge of the cliff, with the rocks and thundering sea one-hundred feet below him.  While the personal terror described by Hardy is palpable, as a geologist myself I just had to marvel as I read the following--

"By one of those familiar conjunctions of things wherewith the inanimate world baits the mind of man when he pauses in moments of suspense, opposite Knight's eyes was an imbedded fossil, standing forth in low relief from the rock.  It was a creature with eyes.  The eyes, dead and turned to stone, were even now regarding him.  It was one of the early crustaceans called Trilobites.  Separated by millions of years in their lives, Knight and this underling seemed to have met in their death.  It was the single instance within reach of his vision of anything that had ever been alive and had had a body to save, as he himself had now."


"Knight was a geologist; and such is the supremacy of habit over occasion, as a pioneer of the thoughts of men, that at this dreadful juncture his mind found time to take in, by a momentary sweep, the varied scenes that had had their day between the creature's epoch and his own.  There is no place like a cleft landscape for bringing home such imaginings as these."

Now that I have your attention, I urge you to read the novel!  You'll enjoy it!  I think that this is an important novel, and is one of his works that Hardy was known to be personally quite fond of.  Typical of Hardy's fiction, Fate and Chance play a prominent role in this novel too.  Also, the character of Elfride Swancourt, as a heroine, is interesting to consider in the evolutionary continuum from 'Fancy Day' (Under the Greenwood Tree), 'Bathsheba Everdene' (Far From the Madding Crowd), 'Eustacia Vye' (The Return of the Native), 'Tess Durbeyfield' (Tess of the d'Urbervilles), and that culminates with 'Sue Bridehead' (Jude the Obscure).

I hope you enjoy A Pair of Blue Eyes as much as I did.  As for me; well, I am taking Far From the Madding Crowd off of the shelf now for a re-read over the next few days.  It is time to spend some more time with 'Gabriel Oak' and 'Bathsheba Everdene.'

[My review is based upon the Wordsworth Classics softcover edition of A Pair of Blue Eyes, published in 1995, 305 pp.; the photograph of St. Juliot Church is included courtesy of Mr. Steve Wheeler, 2003, and was posted on Wikipedia]