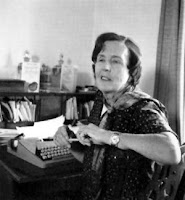 Let's talk about the British author, Barbara Pym, for a bit. Ms. Pym is relatively unknown to most American readers; although there is a bit of a Pym-revival occurring now. Ms. Pym is sometimes casually referred to as "the modern Jane Austen." There is some truth, in my opinion, to that characterization. Most importantly though, Barbara Pym is a wonderful and engaging writer.

Barbara Pym was born in 1913, in Oswestry, Shropshire. She studied English at St. Hilda's College in Oxford. She served in the Royal Navy during World War II, and then worked at the International African Institute until her retirement. While working at the Institute, she helped to edit the Institute's scholarly journal Africa. She never married, and upon her retirement moved into a cottage in Oxfordshire that she shared with her younger sister, Hilary, until her death from breast cancer in 1980, at the age of 66.

Barbara Pym wrote twelve novels between the early-1940s and the late-1970s, with a notable publication hiatus between 1963 and 1977. Britain's well-known modernist poet, Philip Larkin (1922-1985), wrote in the Times Literary Supplement that Pym was "...the most underrated writer of the century." This prominent assessment proved to be a turning point in Pym's literary career, and her novel Quartet in Autumn was short-listed for a Booker Prize in 1977. Pym tended to write about single women living in quiet little villages or suburban communities. There also tends to be some connection to anthropology, or anthropologists, and the Church of England in her plots.

I currently have seven of Ms. Pym's twelve novels, and have read two of them, including: Some Tame Gazelle and Excellent Women. I plan to read her entire oeuvre over the next year or so. In fact, in early-September, my book group on Shelfari.com will be reading Pym's Some Tame Gazelle for a group read and discussion. Many of the group members have read all of Pym's novels and just love her work; so I am very much looking forward to the discussion.

Here is a list of Barbara Pym's novels, and the date written:

*the volumes I currently own.

So, if you love good writing, and are looking for a new author to discover, I strongly recommend that you go find yourself a Barbara Pym novel. Maybe you will find yourself becoming a 'Pymphomaniac' too. Finally, I am attaching the website, for all-things Barbara Pym, maintained by her alma mater, St. Hilda's College, Oxford. Here's the link: www.barbara-pym.org

Thanks to my Shelfari friend, 'Lord Manleigh,' for the appellation, 'Pymphomania' and 'Pymphomaniac.' And thanks to Wikipedia for some of the background information on Ms. Pym.