Charles Dickens and His ‘Bodhisattvas’ 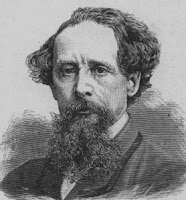 Right up front I'll say it - "I love Charles Dickens's novels, all fifteen of them!" True, there are some that I love more than others, but they have all been a delight to read.

Charles John Huffam Dickens was born in 1812, and died, following a stroke, at his home, Gad's Hill Place, near London, on June 9, 1870. By all accounts, he was a prolific writer. He wrote short stories, founded and edited several literary magazines, wrote novels, dabbled in writing plays, and traveled about giving public readings of selections from his writings.

All of Dickens's novels were serialized in weekly or monthly literary magazines. In his novels, Dickens tended to address issues of social consciousness; and he did it with a mix of commentary, satire, fantasy and realism, and with a touch of sentimentality and Gothic romance. In several of his novels there are even quasi-autobiographical elements too. Dickens wrote about what he knew about. He wandered the streets of London with an observant eye cast upon the people and conditions around him.

About a year ago, I undertook the major project of reading, or re-reading, all of Dickens's novels in the order in which he wrote them. I wanted to carefully analyze his writing style and how it had matured over the thirty-three years between his first novel, The Pickwick Papers (1837), and his final, uncompleted, novel, The Mystery of Edwin Drood (1870). This reading project has been an amazing experience for me; and while I have enjoyed each of the novels, my top four or five Dickens novels come from the latter half of his work (i.e., from Dombey and Son on). My all-time favorites include: Our Mutual Friend (1865), Bleak House (1853), Little Dorrit (1857), and Dombey and Son (1848). From his earlier work, I have to say that I do greatly admire Nicholas Nickleby (1839) and Martin Chuzzlewit (1844) too. In my humble opinion, Dickens's magnum opus is his last completed novel, Our Mutual Friend. This is a novel for the ages, and it provides the segue to the real purpose behind this blog posting.

If you've read any of Dickens's novels, you've encountered his heroes and villains. They are obvious, and there's far too many to count or list here. However, there's another type of character that Dickens typically includes in most of his novels; the ones that I have come to refer to as his 'Saints.' These are the characters, in some cases quite minor, that adhere to the following principle - That they do no harm, and always look to do good. I have a friend in one of my discussion groups on Shelfari.com that refers to these characters as "Bodhisattvas." Loosely translated from Pali (a middle Indo-Aryan language of India), "Bodhisattvas," found in the Buddhist canon, means "enlightened beings," or "a being on the way to full enlightenment." Some prime examples of Dickens's Bodhisattvas include: Sam Pickwick (Pickwick Papers), the Cheeryble brothers and probably Newman Noggs (Nicholas Nickleby), and one of the 'saintliest,' John Jarndyce (Bleak House).

I would like to use Our Mutual Friend and Dombey and Son to illustrate the role that these Bodhisattvas play in Dickens's novels. First, in Dombey and Son, there's my personal favorite, the affable and comical Captain Edward (Ned) Cuttle; and then there is Miss Susan Nipper and Mrs. Polly Toodle (Mrs. Richards). Captain Cuttle, throughout the entire novel goes out of his way to look after those he loves and cares about; namely Walter Gay, Sol Gillis, and later Florence Dombey. He bumbles about a bit; but there's never any question that his heart is in the right spot; and he is the 'good and kind' counterbalance to the malevolent evil of James Carker, the novel's principal villain. Miss Susan Nipper is a Bodhisattva because of her unbending loyalty and love for Florence Dombey whom she has nursed and cared for through childhood and beyond. Polly Toodle is recognized because of her love and care for poor little Paul Dombey, as well as her own large brood of children. Polly Toodle is the personification of 'Motherhood.'

In Dickens's Our Mutual Friend, there are several Bodhisattvas that I've identified. There is Miss Jenny Wren ("My back's bad, and my legs are queer"), the tiny doll's dressmaker; Miss Lizzie Hexam; the lawyer, Mortimer Lightwood; and then there are Noddy and Henrietta Boffin. Mr. Melvin Twemlow, a minor character in the novel, may qualify for the one truly heroic act he performs near the end of the novel; and also in that he does no harm to anyone throughout the book.

Miss Jenny Wren is fiercely loyal to the beautiful, but very poor, Lizzie Hexam. Jenny is also incredibly insightful and perceptive in ferreting out the true motives of all of the novel's major protagonists that she encounters. She doles out information, or mis-information, that influences subsequent actions on the part of some of the players. Perhaps her only flaw is her own personal relationship to her completely ruined alcoholic father (her "very bad child").

Miss Lizzie Hexam is a true Bodhisattva. Even with her very difficult background, she sacrifices virtually everything, including her own happiness, for the sake of family (i.e., her father, Gaffer Hexam, and her selfish younger brother, Charlie). She is willing to give up her love for Eugene Wrayburn because she believes that she is not worthy of his love because of their class differences. Throughout the novel, Lizzie goes out of her way to help those in need, including Jenny Wren and Mrs Betty Higdon. Ultimately, Lizzie is responsible for rescuing and caring for Eugene Wrayburn after he is viciously attacked and left for dead by the horrifying Bradley Headstone.

Finally, it is my contention that the Boffins can be granted 'sainthood,' although at times in the novel it seems to be at odds with the 'facts.' Even with all of the treasure that comes to the Boffins from the Harmon estate, they never lose their sense of self and their kindly nature to all around them. They take in the villainous Silas Wegg (of "Weggery" fame); the lovely, but initially greedy, Bella Wilfer; endeavor to adopt one of Betty Higdon's little orphans, and end up caring for 'Sloppy,' another one of the orphan boys. While the Boffins are equal part comic, satirical, and over-the-top sentimental do-gooders, they may also be Dickens's most obvious candidates for the Bodhisattva designation. With the novel's progression, the Boffins become more and more saintly; and at the end almost achieve the status of canonization.

So, the next time you pick up a Dickens novel to read (and I hope it is soon), do keep an eye peeled for Dickens's Bodhisattvas - his Saints. Give some thought to why you think Dickens included this type of a character in each of his novels. Finally, I'd be curious to know if you agree with this whole notion, and of the 'saints' I've identified here; or if I've missed any other potential candidates. Happy reading!

I'd like to acknowledge the use of Wikipedia for some of the background biographical information for Dickens; and my friend 'Lord Manleigh' for the use of his term for Dickens's saints - Bodhisattvas.

Posted by Christopher at 1:29 PM