A Poem for the Day - "The Solitary Reaper" By William Wordsworth 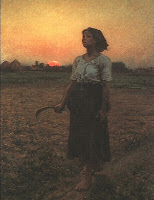 Behold her, single in the field,
Yon solitary Highland Lass!
Reaping and singing by herself;
Stop here, or gently pass!
Alone she cuts and binds the grain,
And sings a melancholy strain;
O listen! for the Vale profound
Is overflowing with the sound.

No Nightingale did ever chaunt
More welcome notes to weary bands
Of travellers in some shady haunt,
Among Arabian sands:
A voice so thrilling ne'er was heard
In spring-time from the Cuckoo-bird,
Breaking the silence of the seas
Among the farthest Hebrides.

Will no one tell me what she sings?--
Perhaps the plaintive numbers flow
For old, unhappy, far-off things,
And battles long ago:
Or is it some more humble lay,
Familiar matter of to-day?
Some natural sorrow, loss, or pain,
That has been, and may be again?

Whate'er the theme, the Maiden sang
As if her song could have no ending;
I saw her singing at her work,
And o'er the sickle bending;--
I listened, motionless and still;
And, as I mounted up the hill,
The music in my heart I bore,
Long after it was heard no more.

I have always loved this beautiful and lyrical ballad by the English poet, William Wordsworth (1770-1850). Wordsworth composed this approximately two years after a summer ramble in the Scottish Highlands with his sister, Dorothy, and his friend, Samuel Taylor Coleridge.

Wordsworth's sister, Dorothy, recorded the event in her journal entry for September 13, 1803: "It was harvest time, and the fields were quietly -- might I be allowed to say pensively? -- enlivened by small companies of reapers. It is not uncommon in the more lonely parts of the Highlands to see a single person so employed."

Also, Wordsworth, in a note to an 1807 edition including the poem, acknowledged that "This Poem was suggested by a beautiful sentence in a MS Tour in Scotland written by a Friend, the last line being taken from it verbatim." Wordsworth’s friend, Thomas Wilkinson, wrote a book, Tours to the British Mountains; and in this travelogue he observed that he had "Passed a Female who was reaping alone: she sung in Erse as she bended over her sickle; the sweetest human voice I ever heard: her strains were tenderly melancholy, and felt delicious, long after they were heard no more."

The poem is written in iambic tetrameter, i.e., the rhyming scheme is "a-b-a-b-c-c-d-d." Although, this scheme breaks down in the "a" rhyme in the first and last stanzas.

I looked at my marginalia notes associated with this poem in my college Romantic Poets textbook (positively ancient now!). Apparently, Wordsworth created several ballads that are considered 'solitaries.' Where the subject of the poem is alone with no interaction with others. In fact, in this poem, the young Highland lass, the reaper, is considered by Wordsworth to be a 'poet' herself; even though Wordsworth doesn't know what she is saying. Is it because he is too far away, and can only hear her singing? Or, is it because he doesn't understand her 'language'? Wordsworth compares the young lass and her singing to that of the Nightingale and the Cuckoo. In other words, they are all 'solitary' singers in touch, or communing, with Nature. Anyway you cut it, this is a beautiful, beautiful poem; and well worth reading every once in a while.

Finally, thanks to my friend, Laurel, for her reminder of the beautiful painting entitled, "The Song of the Lark," by the 19th century French Realist painter, Jules Breton (1827-1906).