"A Trampwoman's Tragedy" By Thomas Hardy 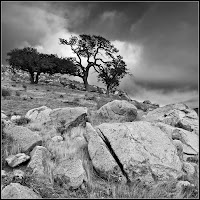 From Wynyard's Gap the livelong day,
The livelong day,
We beat afoot the northward way
We had travelled times before.
The sun-blaze burning on our backs,
Our shoulders sticking to our packs,
By fosseway, fields, and turnpike tracks
We skirted sad Sedge-Moor.

II
Full twenty miles we jaunted on,
We jaunted on, —
My fancy-man, and jeering John,
And Mother Lee, and I.
And, as the sun drew down to west,
We climbed the toilsome Polden crest,
And saw, of landskip sights the best,
The inn that beamed thereby.

III
Ay, side by side
Through the Great Forest, Blackmoor wide,
And where the Parret ran.
We'd faced the gusts on Mendip ridge,
Had crossed the Yeo unhelped by bridge,
Been stung by every Marshwood midge,
I and my fancy-man. 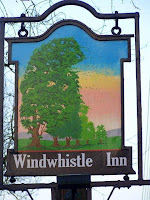 IV
Lone inns we loved, my man and I,
My man and I;
'King's Stag', 'Windwhistle' high and dry,
'The Horse' on Hintock Green,
The cosy house at Wynyard's Gap,
'The Hut', renowned on Bredy Knap,
And many another wayside tap
Where folk might sit unseen.

V
O deadly day,
O deadly day! —
I teased my fancy man in play
And wanton idleness.
I walked alongside jeering John,
I laid his hand my waist upon;
I would not bend my glances on
My lover's dark distress.

VI
Thus Poldon top at last we won,
At last we won,
And gained the inn at sink of sun
Far-famed as 'Marshal's Elm'.
Beneath us figured tor and lea,
From Mendip to the western sea —
I doubt if any finer sight there be
Within this royal realm.

VII
Inside the settle all a-row —
All four a-row
We sat, I next to John, to show
That he had wooed and won.
And then he took me on his knee,
And swore it was his turn to be
My favoured mate, and Mother Lee
Passed to my former one.

VIII
Then in a voice I had never heard,
I had never heard,
My only love to me: 'One word,
My lady, if you please!
Whose is the child you are like to bear? —
His? After all my months o' care?'
Gods knows 'twas not! But, O despair!
I nodded — still to tease.

IX
Then he sprung, and with his knife —
And with his knife,
He let out jeering Johnny's life,
Yes; there at set of sun.
The slant ray through the window nigh
Gilded John's blood and glazing eye,
Ere scarcely Mother Lee and I
Knew that the deed was done.

X
The taverns tell the gloomy tale,
The gloomy tale,
How that at Ivel-Chester jail
My love, my sweetheart swung;
Though stained till now by no misdeed
Save one horse ta'en in time of need;
(Blue Jimmy stole right many a steed
Ere his last fling he flung.)

XI
Thereaft I walked the world alone
Alone, alone!
On his death-day I gave my groan
And dropt his dead-born child.
'Twas nigh the jail, beneath a tree,
None tending me; for Mother Lee
Had died at Glaston, leaving me
Unfriended on the wild.

XII
And in the night as I lay weak,
As I lay weak,
The leaves a-falling on my cheek,
The red moon low declined —
The ghost of him I'd die to kiss
Rose up and said: 'Ah, tell me this!
Was the child mine, or was it his?
Speak, that I my rest may find!'

XIII
O doubt but I told him then,
I told him then,
That I had kept me from all men
Since we joined lips and swore.
Whereat he smiled, and thinned away
As the wind stirred to call up day. . .
--'Tis past! And here alone I stray
Haunting the Western Moor.


NOTES--
Stanza I
Fosseway - The "Fosse Way" a very straight Roman road that runs from southwest England all the way up to Lincoln, a distance of over 180 miles.  The Somerset portion of the Fosse Way actually touches Windwhistle, mentioned in the poem.

Stanza II
Fancy-man - common-law husband, or a man living off the earnings of a prostitute.
Landskip - archaic form of "landscape," descriptive of inland scenery (from 17th c. Dutch painting).

Stanza III
Blackmoor - This, like most of the other places mentioned, is in south-west England, especially Dorset. Blackmore Vale (Valley) is just beyond the Dorset Uplands, north-west of Dorchester.
Marshwood midge - a stinging, gnat-like insect.

Stanza IV
King's Stag, Windwhistle, The Horse - the names of inns located along the Fosse Way.  Hardy's reference to the "Windwhistle high and dry" refers to its location on top of a hill and had no well and only alcohol to drink.

Stanza VI
Tor and lea - The Tor at Glastonbury is a medieval watchtower on a steep incline known as Tor Hill. "Lea" means "a tract of open ground."

Stanza VII
Settle - a wooden bench with high back and arms.

Stanza X
Blue Jimmy - a British horse-thief of some renown.


It is October, and fall is upon us.  I thought it might be fun to post a few of Thomas Hardy's narrative poems that are somewhat spooky or border on the macabre, and A Trampwoman's Tragedy certainly qualifies on both counts.  Apparently, Hardy had taken a bicycle ride up around Glastonbury in Somerset County and had heard a story about a woman named Mary Ann Taylor, and when he returned to his home (Max Gate) in Dorset he crafted this poem in 1902 and submitted it for publication to the Cornhill Magazine for publication.  It was rejected as "unsuitable for a family periodical".  It was, however, published in the North American Review in the November 1903 issue.  Hardy came to believe that A Trampwoman's Tragedy was "upon the whole his most successful poem", and included it among his collection of poems entitled Time's Laughingstocks and Other Verses published in 1909.

[The black and white photograph at the top of the post is an image that I took in 2007 on a cold and blustery day on Tehachapi Pass in the southern Sierras east of Bakersfield, California.  It very much reminds me of some of the landscapes Hardy describes in this poem.]

Posted by Christopher at 3:53 PM