Review: "The Darkest Days of the War--The Battles of Iuka and Corinth" By Peter Cozzens 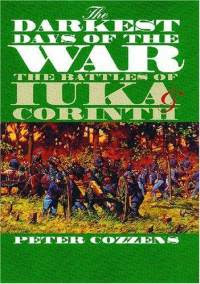 Peter Cozzens is rapidly becoming one of my favorite Civil War authors, and The Darkest Days of the War: The Battles of Iuka and Corinth is just one good example of why.  This a well-written, fast-paced historical accounting of a campaign and two sharply fought battles in the extreme northeastern corner of Mississippi in early fall 1862.  There may be other accounts of the battles of Iuka and Corinth out there in the many thousands of Civil War books that have been written, but I'm betting that this really is one of the best, if not the best.  It is a relatively fast read at something over 300 pages.  It contains some terrific illustrations and some truly superb maps.

Corinth was important from a strategic perspective to both the Union and Confederate forces, as it was a relatively important rail junction that accessed the Mississippi valley (to the south and west), Tennessee (to the north), and connected with Chattanooga and Atlanta (both to the east).  The Union needed to control the Corinth region in order to facilitate planned future movements towards both Vicksburg and Chattanooga.  The bottom line was that Corinth was, in a sense, a magnet that drew the opposing forces to it; and if the war was going to be effectively prosecuted in the western theater, Corinth had to figure prominently in the plan and be controlled by one side or the other.

It was interesting to me that in reading this book I learned a lot about the early or formative periods, if you will, of Union Generals Ulysses S. Grant and William S. Rosecrans.  While Grant had largely kind of stumbled into a major victory at Shiloh in early-April 1862, he really wasn't all that helpful or supportive of Rosecrans during the Corinth campaign described in this book.  For his part, Rosecrans exhibited traits during both of the battles at Iuka and Corinth that should have had the Union high command sit up and take notice (and not in a good way!).  Rosecrans seemed to have not handled stress well at all during the actual fighting phase of the battles he was involved in, and would become almost bizarrely disconnected and even panic-stricken.

Grant, following his experiences at Shiloh, would learn and steadily improve his performance as both an operational strategist and as an on-scene battle commander.  Unfortunately, Rosecrans really didn't shake his bad habits, and later as the commander of the Army of the Cumberland he was badly beaten at the bloody Battle of Chickamauga (mid-September 1863).  Also, the professional relationship between Grant and Rosecrans soured following the Battle of Corinth, and the two men never could effectively work together from that point forward.  After the Corinth campaign, Grant moved on and conducted the brilliant Vicksburg campaign, and largely made himself indispensable to the Union cause.  Meanwhile, Rosecrans again got lucky and barely eked out a victory at the bloody Battle of Stones River (Murfreesboro) in Tennessee on January 1, 1863.  By the late-fall of 1863, Rosecrans was out of a job, and Grant was well on his way to eventually becoming the General-in-Chief of all Union forces in early 1864.

Intriguingly, the same sort of questionable leadership situation was sorting itself out on the Confederate side at Corinth too.  The two rebel commanders, Major Generals Earl Van Dorn, and Sterling Price were largely way over their heads in trying to conduct this campaign, and it was only through utter ineptitude, particular on the part of Van Dorn and several of his subordinate division commanders, that Rosecrans wasn't decisively defeated at both Iuka and Corinth.  The really tragic part of this story, and Cozzens tells it well in this book, is that because of the blunders of the commanders on both sides, a lot of good and patriotic men in butternut and blue were killed or horribly maimed.

Peter Cozzens has written several books about the Civil War in the western theater, and while I still think his masterpiece This Terrible Sound: The Battle of Chickamauga is one of the best (reviewed here), this book about the battles at Iuka and Corinth is an excellent account about a somewhat forgotten, but still quite important campaign.  Finally, I think by reading Cozzens' books about the Battles of Iuka, Corinth, Stones River, Chickamauga, and Chattanooga the reader can't help but begin to better understand the strategic importance of the western theater and the commanders, on both sides, that had to fight for and defend these regions.  Cozzens, through his books, wants us to understand that there was much, much more to the Civil War than just the theater of operations around Washington, D.C. and Richmond, Virginia, and that thousands upon thousands of men "gave the last full measure of devotion" on far-flung western battlefields, large and small, like those at Iuka and Corinth.

The Darkest Days of the War: The Battles of Iuka and Corinth
By Peter Cozzens
Hardcover, 389 pages
University of North Carolina Press, 1997