Literary Blog Hop: "What is your favorite poem and why?"

The folks over at The Blue Bookcase sponsor "The Literary Blog Hop," a weekly meme, that gives all of us who read and write about books an opportunity to find and make new friends, and exchange ideas.  This week's question was submitted by Gary at The Parrish Lantern.

What is your favorite poem and why?

I normally do not qualify answers to questions, but I'm making an exception here.  I consider myself quite the connoisseur and a serious student of poetry.  As many of you know, I post lots and lots of poetry here at ProSe.  I also have an extensive collection of poetry that I am continually delving into.

Okay, so why do I feel compelled to qualify my answer to Gary's question?  For me, it just isn't as simple as saying that this poem, or that poem, is my most favorite poem.  Depending upon my mood, time, or place, I can think of many, many poems that would, or could, be my favorite poem.  From the perspective of the most perfectly written poem that really packs a punch, I might be inclined to suggest that John Keats' La Belle Dame sans Merci. A Ballad rises to the top.  At another moment it might very well be Emily Dickinson's poem No. 712, Because I could not stop for Death--. 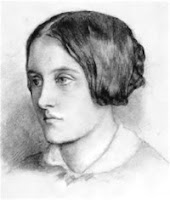 Be that as it may, at this moment in time my favorite poem is by Christina Georgina Rossetti, an English poet of the Victorian era.  She was the youngest sister of the Pre-Raphaelite painter and poet, Dante Gabriel Rossetti (at right is his pencil sketch of Christina).  Christina Rossetti was born in 1830, and died in 1895.  She was truly a prolific poet, writing something over 1,000 poems over the course of her life, and is perhaps best known for her epic poem, Goblin Market.

An Echo From Willowwood

"O ye, all ye that walk in Willowwood." D.G. Rosetti

Two gazed into a pool, he gazed and she,
Not hand in hand, yet heart in heart, I think,
Pale and reluctant on the water's brink
As on the brink of parting which must be.
Each eyed the other's aspect, she and he,
Each felt one hungering heart leap up and sink,
Each tasted bitterness which both must drink,
There on the brink of life's dividing sea.
Lilies upon the surface, deep below
Two wistful faces craving each for each,
Resolute and reluctant without speech: —
A sudden ripple made the faces flow
One moment joined, to vanish out of reach:
So those hearts joined, and ah! were parted so.

One of the things that I love so much about this poem is its relationship to the back-story.  This poem is an example of the poet utilizing his/her unique life experiences.  In An Echo from Willowwood, Christina is telling the story of the love between her brother, Dante, one of the founders of the Pre-Raphaelite Brotherhood, and his wife, Lizzie Siddal.  At the same time, Christina has crafted her sonnet to play off of Dante's earlier 'Willowwood' sonnets that were written about his wife, who died in 1862 due to laudanum addiction. So the story goes, Lizzie had left sketches of herself and Dante looking into pools of water together; these sketches then inspired the poetry of both of the Rossetti siblings. Finally, you might also be interested to learn that Lizzie Siddal served as the model for Sir John Everett Millais's famous Pre-Raphaelite painting "Ophelia."  Somehow, I think that Christina has perfectly captured the tenderness and deep love that Dante and Lizzie shared, but I also think she very effectively touches upon the sadness to come.  To me, this is a meaningful, very beautiful and poignant poem.

Posted by Christopher at 6:49 PM