A Poem for the Day: "Cloverton" by Me 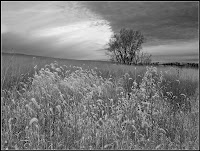 Tonight I am featuring a poem that I recently wrote.  I just returned from a week-long trip to Nebraska visiting my daughter and her husband.  My daughter and I took the opportunity to drive a few hours over to Red Cloud, Nebraska and spend the day in Willa Cather country.  Cather is one of America's great novelists of the early 20th century, and was the second female to be awarded the Pulitzer Prize for Fiction in 1923 for her novel, One of Ours (Edith Wharton was the first in 1921).  One of the stops we made was at the tiny Cloverton Cemetery where Anna Pavelka is buried.  Just down the road from the cemetery is the old farm-house where Anna Pavelka lived and raised all of her children.  Anna was the inspiration for Cather's great character, 'Antonia Shimerda' in her wonderful novel, My Antonia.  This visit to this cemetery, and seeing Anna's grave truly inspired this humble effort of mine.  I'd love to know what you think of the poem.

Posted by Christopher at 9:46 PM