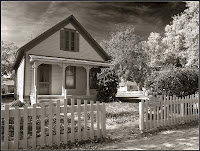 How many of you have read the novels and short stories of Willa Cather?  She is one of my favorite American novelists!  I just returned from spending a week in Nebraska visiting my daughter and her husband in Lincoln (home of the University of Nebraska).

We took a couple of day trips and were able to visit Cather's hometown of Red Cloud, Nebraska.  My daughter is quite the Cather scholar and really gave me a superb 'busman's tour' of all of the important Cather sites and scenes from many of her novels.  It was just an awesome experience!

I took several photographs while visiting Red Cloud, and thought that it might be fun to share them with all of you.  The photograph at top upper-right is a black and white conversion that I made of Cather's childhood home in Red Cloud.  Please do make sure that you 'click' on each photograph for the larger view. 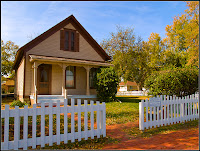 Here's Cather's home in color.  The trees are all just starting to change into their fall colors too.

This black and white photograph (at right) is the Miner House (the fictional 'Harling' house), and is where Willa Cather frequently stayed when she came back to Red Cloud to visit family and friends.  This house is thought to have been built in 1878, and is in the Italianate style.  She dedicated My Antonia to two of the Miner girls, Carrie and Irene ("To Carrie and Irene Miner, In memory of affections old and true"). 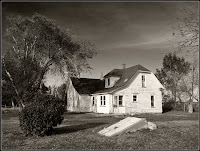 This is the house that Anna Pavelka lived in out on the Nebraska prairie outside of Red Cloud.  Anna is the woman that Willa Cather generally based her character Antonia Shimerda upon in her classic novel, My Antonia.  The root cellar (tornado shelter too?) in the foreground is the one that Jim and Antonia climb out of followed by the gaggle of little children.  While this old abandoned house is owned by the Nebraska State Historical Society, it is in a desperate state of disrepair.  I hope that the means can be found to protect and restore this beautiful piece of Americana. 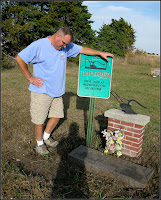 The photograph, at right, is of Anna Pavelka's grave in the tiny Cloverton Cemetery.  This cemetery is miles from anywhere out in the midst of the endless Nebraska prairie.  It was truly poignant to stand at this woman's grave and realize all that she had accomplished.  Besides being a muse and inspiration for Willa Cather's writing, she bore and raised thirteen children and lived a long life.  I do wish that they (whoever 'they' are) had not planted that ugly metal sign right on top of the poor woman's grave.  Even if one had had to browse about to find her grave, it shouldn't have taken very long.  It isn't a big cemetery at all. 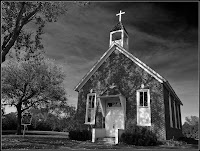 This is a photograph of the St. Juliana Falconieri Catholic Church in Red Cloud.  This is where Annie Pavelka's ('Antonia's') baby was baptized.  It is now owned and protected by the Nebraska State Historical Society.  It was built in 1883 and was used by the diocese until 1903. 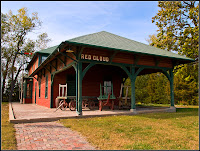 This is a photograph that I made of the Red Cloud Burlington Train Depot.  This is the train station that Willa Cather would passed through in her journeys to and from Red Cloud.  It has been lovingly restored too, and was fascinating to visit.  During Red Cloud's heyday, this depot would have seen something like ten trains a day passing through town.  Red Cloud was on the main-line between Kansas City and Denver.

Finally, I am including a photographic portrait of Willa Cather that I have always liked.  The necklace that she is wearing was given to her by her very good friend, and fellow author, Sarah Orne Jewett (The Country of Pointed Firs and Other Stories).  This photo of Willa is thought to have been taken about 1912 and was taken in New York.

Willa Cather was born in Virginia in 1873, and died in 1947.  When Willa was nine years old, her family moved to Red Cloud, Nebraska.  She later attended and graduated from the University of Nebraska in Lincoln, Nebraska.  She then went back east and worked as a teacher, newspaper writer and editor, and an editor of magazines.  Most importantly though, Willa Cather is known for her beautiful novels.  To finish this posting I am including a listing of all of her novels, in the order in which they were published.