I just returned from nearly two weeks of traveling through the deserts and high deserts of New Mexico and southern Arizona. I was able to spend some quality time with my brother, Gregory, in Santa Fe, New Mexico, where he lives; and with my parents in Green Valley, a small town south of Tucson, Arizona. Much of the trip, however, was dedicated to my on-again/off-again hobby of landscape photography. I met up with a fellow photographer, Leo Burkey, at the Albuquerque International and off we went.

Leo and I spent a couple of days photographing some of the landscapes around Santa Fe (e.g., see the photo of Pecos Ruins, above right; click on the photo for a larger view) and then took off for the remote Chaco Culture National Historical Park in northwestern New Mexico. The last time I was at Chaco it was known as "Chaco Canyon National Monument." In the late 1980s, it was designated as a "World Heritage Site," and for very good reaon. Chaco is a fabulous complex of Anasazi Indian ruins and roadways that dates from about 1100 A.D. through about the mid-1300s. The Chacoan peoples were sophisticated architects, farmers, and craftsmen, and likely carried on significant trading with populations of native American peoples along the Pacific coast and deep into Mexico to the south. The U.S. National Park Service (NPS) administers the park in consultation with numerous native American tribes that claim an ancestral connection to the region.

Photographing at Chaco is difficult, at best. The ruins are made of 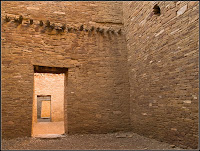 the same rock as that of the surrounding mesas and cliffs and everything tends to blend together. But as one walks through and around these ruins, one cannot but be simply overwhelmed by the amazing architecture and stonemasonry (see my photo, at right, of the three doorways and four rooms at dawn, inside of Pueblo Bonito. Click on the photo for a larger view). To this day, I think it would be difficult to slip a piece of paper between the rocks in the walls. I made some interesting photos at Chaco, but would certainly love to go back and try some different techniques, and also try and be there when there were more clouds in the sky. Truly a magical, mystical, and very spiritual place to visit and camp. We saw a herd of elk and one very healthy looking coyote.

The National Park Service reports that the average number of annual visitors is about 60,000; making Chaco one of the least visited units in the entire NPS system. A lot of that is due to the overall remoteness of the site and the rather beastly washboard dirt road into the park. There is potable running water and excellent camping and rest-room facilities at the park too. I strongly encourage a visit to this world treasure if you are ever in northwestern New Mexico.

From Chaco, Leo and I spent a long day driving south through New Mexico to White Sands National Monument near Alamagordo, New Mexico. As a side-note, we stopped at the fabulous "Owl Bar & Cafe" in San Antonio, New Mexico, for a world renowned 'green chile cheeseburger' and 'green chile fries.' Wow! They were just as good as I remembered from my days of living in Socorro, New Mexico, and attending the New Mexico Institute of Mining and Technology. Leo and I drove past the Trinity Site, where the United States exploded the first atomic bomb at the nothern end of the long valley now occupied by the White Sands Missile Range. Leo and I arrived at White Sands National Monument with about an hour daylight left, and just in time for a terrific monsoon thunderstorm event with plenty of clouds, lightning, thunder, and rapidly changing lighting conditions (e.g., see the photo at right; click on it for a larger view). 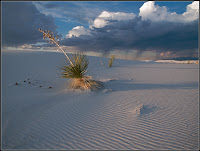 White Sands National Monument is administered by the NPS and protects several square miles of very unique gypsum sand dunes and its associated ecosystem. Gypsum is comprised of calcium sulfate and water and appears pure white to the eye. We had wonderful skies with puffy and streaming cloud formations for our photography there; and I think we both felt that we got some our best shots of the trip there. Again, if you're in the neighborhood of Las Cruces, or Alamagordo, New Mexico, this is a definite must see.

From White Sands, Leo and I meandered over to the remote Chiricahua Mountains in extreme southeastern Arizona. As you travel about this country be prepared to be contacted by the U.S. Border Patrol frequently. Frankly, this country has never been the same following September 11, 2001. I remember rattling about this country twenty years ago and just banging into the odd rancher or two every once in a while; but now the roads are full of one Border Patrol vehicle after another.

The Chiricahua Mountains are the remnants of a massive rhyolitic volcanic eruption millions of years, and the deposition of hundreds of feet of welded ash-flow tuffs. Subsequent millenia of erosion have exposed the most beautiful and unique geologic formations of weirdly shaped spires and boulders. The National Park Service administers a small park unit in the Chiricahuas known as Chiricahua National Monument. This is one of the prettiest and cleanest national park units I have ever camped in, and I highly recommend it. Excellent hiking trails criss-cross the monument; and all of them are set up for day-hiking. Most, if not all, of the buildings, trail systems, and roads were constructed during the height of the Great Depression by the men of the Civilian Conservation Corps; and let me tell you, this stuff ain't going away any time soon. Again, this park unit is not particularly well visited; and averages about 50,000-60,000 visitors annually. We saw beaucoup wildlife here too - little herds of javelina, lots of Mexican bluejays, several species of hawks, warblers galore, acorn woodpeckers, white-tailed deer, and coyotes.

From the Chiricahuas, Leo and I drove west across southern Arizona to Green Valley, and bunked in with my parents for a couple of days while we photographed in and around the Tucson area. We spent an afternoon at Tumacacori National Historical Park, a morning photographing at the San Xavier del Bac Mission, and an evening shoot at the west unit of Saguaro National Park, where we even found a couple of rattlesnakes at sunset.

Finally, after a day-long drive from Green Valley, we arrived back at my home here in Santa Clarita. I put Leo on a plane back to Florida the next morning and promptly came down with the flu. I have been pretty much bed-ridden the past three-days trying to get over this damn bug. On the bright side, I have been able to begin to carefully go through and begin working up and posting some of my photographs from the trip.

Anyway, there's the rundown on the trip, and here's the link to my on-line photography (click here). The top three folders (i.e., Pecos, White Sands, and Chaco) contain the photographs that I have processed so far. I do hope you enjoy them!