Review Redux: "Gardens of the Moon" By Steven Erikson (Malazan Book of the Fallen #1) 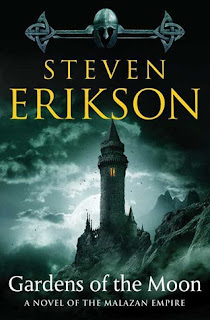 For those of you that follow ProSe bear with me, as I will be reviewing a book in this posting that I reviewed two years ago here.  Gardens of the Moon by Steven Erikson is an amazing novel on so many levels, and I guess part of my rationale in providing another look at it is to encourage more readers to discover the incredible world and story that Erikson has created in his ten-volume series known as "The Malazan Book of the Fallen".

Gardens of the Moon, and the entire "Malazan Book of the Fallen" series is generally classified as fantasy fiction, and while that is an appropriate designation, it is also so much more than that.  I'd like to use this posting to briefly describe why I think it is actually kind of hard to simply pigeon-hole this series safely in the fantasy genre.

First of all, let's talk about what this series is not.  The "Malazan Book of the Fallen" (or, MBotF) is not a recounting of an epic struggle between Good and Evil.  Nor is the MBotF a bildungsroman of some young poor farmer boy or girl who sets out upon a grand and desperate quest to save the world from an evil sorcerer or ruler.  Finally, the MBotF series is not the story of one, or even a few, main characters, but contains a cast of hundreds.  Frankly, very few of the typical fantasy tropes are in play in this series, the MBotF is some seriously new and cutting-edge stuff, and it probably is not going to appeal to all who pick it up.  I'm also convinced that the MBotF is destined to ultimately be viewed as 'classic' and will be read for many, many years to come.  It really is that original.

Up front you need to realize that Steven Erikson does not 'hold your hand' while reading this series.  By that I mean there are no big 'information dumps' that explain the Malazan world, or detailed character backgrounds, or in-depth descriptions of how the magic systems works, or even what's going on at any precise moment in time.  You really gotta work for it in reading this series, and sometimes its bloody hard work and can be quite frustrating.  In some respects, reading the MBotF is kinda like assembling a giant 10,000-piece jigsaw puzzle of a Jackson Pollack painting--it takes time, and it can be confusing as hell; but when it 'clicks' it becomes an immensely satisfying reading experience, and one that you'll want to revisit and delve into for the rest of your life.

To me, the MBotF is like reading the history of a whole planet, as you will be learning about new cultures and events that have occurred over the span of several hundred millenia.  This characteristic is actually very reflective of Erikson's educational background and years of work experience.  'Steven Erikson' is the pen-name for Steve Rune Lundin, a Canadian anthropologist and author.  Apparently, a lot of the original concepts associated with elements of the MBotF were 'ginned up' by Erikson and his friend, Ian C. Esslemont (more on Esslemont later) during anthropological/archaeological field trips and sitting around the campfire at night.  As you read these books you do recognize similarities between some of the characters and cultures in Erikson's Malazan world and historic and prehistoric human cultures.  For example, there are human-like peoples that very much reminded me of early hominid species like Neanderthals and the even earlier hominid, Homo erectus, and there are races of peoples that certainly remind me of various Native American cultures.  The Malazans themselves bear some similarity to the peoples and cultures of the ancient Greek or Roman empires.

The mythopoeic quality of the MBotF series is astounding and maybe one of the more important elements that sets this series apart from all other modern fantasy fiction.  The only other book, in my humble opinion, that creates such a fantastical and intellectually creative fictional mythology is The Silmarillion by J.R.R. Tolkien.  Erikson's mythology, like Tolkien's, is an elegant amalgam of creation and origin myths, religious elements, and cultural and social geography all of which seems to be strongly connected to the environment and geology of the Malazan world.  The MBotF contains an enormous and complex pantheon of goddesses and gods that rivals the Greeks, Romans, Norse, Celts and other human cultures.  Much of this mythology is presented in the MBotF as epigraphical poetry or fictional bits of history leading off chapters in each of the books, that when initially read can seem quite enigmatic but ultimately help illuminate plot points and/or foreshadow events to come.  Interestingly, the Malazan world goddesses and gods, like the Greek gods of Homer's The Iliad and The Odyssey delight in meddling in the affairs of the mortals, and are perhaps even somewhat envious of the Human condition, i.e., the capacity to love, to experience pain, sadness, joy, and even to die. 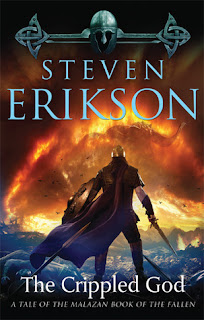 The MBotF, while a series of ten interconnected books, is not an entirely linear plot structure.  Each book in the series could, I suppose, be read on its own with varying degrees of success.  The point is that each book is largely a self-contained 'chapter' in this magnificent saga, this 'history', of the Malazan world.  Each novel also tends to introduce a whole host of new characters, cultures, a new geographic locale and environmental conditions, and sometimes even new gods and goddesses, but--and its an important "but"--each book and its individual story arc is hugely significant in successfully making the intellectual journey from the first book in the series, Gardens of the Moon, to the tenth and final book, The Crippled God.  And you just gotta make this journey, as it is some of the most mind-bogglingly awesome fiction you'll likely ever encounter.  There is a storyline and cast of characters that you genuinely care about, and enough pathos and drama to carry the reader through the full gamut of emotions--from the heights of great joy and laughter to the depths of profound grief.

Gardens of the Moon is arguably the toughest book to read in the entire series, and much of that is simply related to the reader having to become accustomed to Erikson's writing and story-telling style.  As I said earlier, he makes you work for it.  It took me two attempts before I successfully read and completed Gardens of the Moon, and from what I understand I'm not particularly unique in that experience.  I think if you can just 'hang tough' and get through the first four chapters, you'll start being able to put some pieces of the puzzle together and I'm betting that your interest will be piqued enough to see you through the end of the novel.  This novel, like all in the series, is full of a gritty, but heart-felt realism that I think we can all relate to, i.e., it just feels right some how.  And once you've finished Gardens of the Moon and start Deadhouse Gates (one of my personal favorites in the series), I predict that you'll be hooked and then you're in for the long-haul.

Gardens of the Moon opens with a great battle involving a Malazan army and its mages attacking the city of Pale and a bizarre gigantic chuck of basalt that is suspended in the sky over Pale that is known as "Moon's Spawn".  While you will likely leave the first couple of chapters somewhat 'dazed-and-confused', you should probably take the time to go back and reread sections of this opening section again and again, and the 'muddy waters' will slowly begin to clear for you.  I recommend that new readers get used to the notion that being 'dazed-and-confused' initially is really okay, and that eventually you will come across information later that helps explain things and start answering your questions.  Erikson rewards you as you figure things out, as you get these significant 'aha', or 'lightbulb', moments.  For example, the 'Siege of Pale' (Chapter Two) is an important event, and will be referred to time and time again throughout all ten books in the series, but you'll not quite have it all figured out until you're well into the series.  Anyway, following the events at Pale, the scene shifts south to the large city of Darujhistan and the Malazan Empire's efforts to covertly infiltrate the city and bring it to heel.  To the best of your ability, pay attention to everything, for just about everything that Erikson gives you is important, including events as well as things said.  Utilize the "Dramatis Personae" and maps (at the front of the book) and the "Glossary" (at the end of the book) liberally.  Slowly, but surely, you'll begin to get your 'sea-legs' in the Malazan world and you'll soon find yourself swept up in the tale. 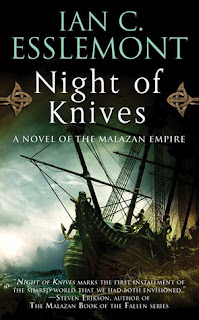 Finally, I want to come back to Erikson's friend, Ian C. Esslemont, or as we Malazan fans refer to him, ICE.  Esslemont is also an archaeologist and author, and is the co-creator of the Malazan world with Steven Erikson.  In fact, ICE has now authored five novels in his "Malazan Empire" series, and the plots of his books are inter-woven and connected with the ten books in Erikson's MBotF.  It is my understanding that ICE has a couple more Malazan Empire novels in him and then we'll have "the rest of the story".  The cool thing is that ICE uses his novels to tell the stories about events and happenings or topics about which Erikson has been specifically vague or even silent on.  So, by reading the books of both authors a reader really can start figuring it all out.

In conclusion, I highly recommend both the MBotF series by Steven Erikson, and the Malazan Empire books by Ian Esslemont.  I have read the entire "Wheel of Time" series by Robert Jordan (and capably finished by Brandon Sanderson), and the "A Song of Ice and Fire" series by George R.R. Martin, and while they are both very, very good, the Malazan world created by Messrs. Erikson and Esslemont kicks their collective asses!  Don't take my word for it though, give Gardens of the Moon a try, and see what you think.  Try your best not to give up, and just persevere through the first one-hundred pages or so; and if you do give up, just set it up on the shelf and come back a few weeks later.  It'll 'click' at some point, and you be so glad that it did.  It is one of my favorite series of books, and I know that the Malazan world is going to be a part of my literary life as long as I live.

If you're interested, here's a listing of Erikson's books in the "Malazan Book of the Fallen" series--