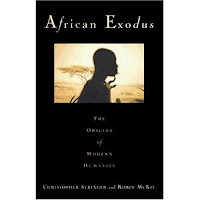 Christopher Stringer's book, African Exodus: The Origins of Modern Humanity  (Henry Holt, 1996) is a thoughtful, very well-written and detailed presentation of the prevailing model associated with modern human origins known as "The Out-of-Africa" hypothesis.  Stringer is not only an incredibly articulate advocate for the model, but he is generally thought of as one of the principal architects of the hypothesis.  Stringer's book, while written in the mid-1990s, provides the reader with an excellent synopsis and overview of the fossil, biological, cultural, and genetic evidence and information associated with the hominin species that occupied portions of our planet over the past five-million years.

If you're new to human origins and anthropology, or if you're looking for a good 'refresher' to the topic and the areas of controversy, then this is the book for you.  While the "Out-of-Africa" hypothesis has morphed and has really become more complex over the past decade or so, the basic tenets of the model still hold.  Finally, if you read this book you'll certainly want to follow it up with Chris Stringer's new book, Lone Survivors: How We Came to Be the Only Humans on Earth (Henry Holt and Co., Inc.), that was published in mid-March 2012.  This book, written some 16 years later, provides an in-depth overview of the current state-of-the-knowledge associated with modern human origins.  I recently read it and highly recommend it too, and I've posted my review of the book above.