The U.S. Open Mens Semifinal between Novak Djokovic and Roger Federer, the world's number 1 ranked player (Novak) versus the number 3 ranked player (Roger) was unbelievably amazing from start to finish and is destined to be an instant classic.  The winner of the match would go on to face the winner of the Rafael Nadal/Andy Murray match in the final of the U.S. Open on Monday, September 12, 2011, and it totally lived up to its billing and all of the hype! 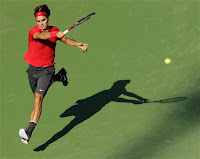 Djokovic was down two sets to love in a potential five-set match, and he looked like he was going to lose to the crafty veteran, Federer, in straight sets.  Shortly after the beginning of the third set the mood of the match changed, and it was evident that Djokovic had sunk his teeth into the match and was not going to go away without a fight--and fight he did!

Djokovic went on to reel off the next two sets, and the two men then started the fifth, and final, set to decide the outcome of the match and who would move on to the final on Monday.  Back and forth the two men went, both serving pretty well and hitting the most amazing returns and ground strokes.  This was championship tennis at its very, very best.

Federer even had two match points to finish off Djokovic and advance to the final, but it was not to be.  Djokovic cracked a laser-like return to negate one match point (this shot stunned Federer and the nearly 24,000 people in Arthur Ashe Stadium).  Federer then served a nearly 110 mph serve right into Djokovic's body that somehow the young Serbian managed to block back across the net for a winner.  This erased the remaining match point for Fed, and it was all Djokovic from this point on.  A stunning turn of events.  In retrospect, this exhibition of tennis excellence from Djokovic shouldn't have surprised me so much.  He has had an absolutely awesome year, with a win/loss record of 63-2--and has won two majors (The Australian Open and Wimbledon)!

While Rafael Nadal dispatched the Scot, Andy Murray, relatively easily in four sets in the other mens semi-final, I have to think that Djokovic will win his third major this year by winning the U.S. Open Final on Monday night.  It should be a helluva final--another great battle between Rafa and the Djoker.  Me, I'd like to see Djokovic win this and just put a heck of an exclamation point on the great year he has had so far.

If you really love tennis go to You-Tube, or the U.S. Open's website (usopen.org/) and look for the video of the match between Federer and Djokovic.  Awesome stuff!

Posted by Christopher at 7:30 PM