A Poem for the Day: "Retty's Phases" by Thomas Hardy 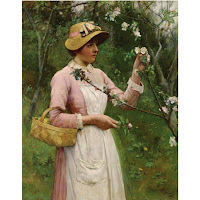 The poem I want to share with you tonight is one that haunts me in many respects.  I come back to it, time, and time again.  It is a sad, poignant, and beautiful lament associated with young love.  This poem has the distinction of being thought to be the oldest surviving manuscript of any of Thomas Hardy's poetry, and was written in 1868.  The original manuscript of the poem is preserved in the Dorset Museum.

Retty's Phases
I
Retty used to shake her head,
Look with wicked eye;
Say, 'I'd tease you, simple Ned,
If I cared to try!'
Then she'd hot-up scarlet red,
Stilly step away,
Much afraid of what she'd said
Sounded bold to say.

Retty used to think she loved
(Just a little) me.
Not untruly, as it proved
Afterwards to be.
For, when weakness forced her rest
If we walked a mile,
She would whisper she was blest
By my clasp awhile.

Retty used at last to say
When she neared the Vale,
'Mind that you, Dear, on that day
Ring my wedding peal!'
And we all, with pulsing pride,
Vigorous sounding gave
Those six bells, the while outside
John filled in her grave.

Retty used to draw me down
To the turfy heaps,
Where, with yeoman, squire, and clown
Noticeless she sleeps.
Now her silent slumber-place
Seldom do I know,
For when last I saw  her face
Was so long ago!

Thomas Hardy appended the following note to the manuscript--


"NOTE.--In many villages it was customary after the funeral of an unmarried woman to ring a peal as for her wedding while the grave was being filled in, as if Death were not to be allowed to balk her of bridal honours.  Young unmarried men were always her bearers."

Now, isn't that a tale?  Beautiful, lyrical, and oh so sad.  It never fails but to bring the tears to my eyes as I read it.  And it did again tonight...

I have mated this poem with a beautiful painting by the English painter, Edwin Harris (1855-1906).  The painting is entitled, "Apple Blossom at Newlyn," and it just seems to fit the image of young Retty that I carry in my head.  [Be sure to 'click' on the image for a larger view of the painting.]