A Summer of Hummingbirds

This is the start of our second summer with two giant hummingbird feeders hanging on the slatted roof over the patio. Each feeder holds a quart of sugar water, and the little whirling dervishes go through both in about 48 hours! At times there can be a dozen, or more, of these flying jewels, whirring about and queuing up at each feeder. I have had several species come to the feeders, but typically the two species most prominently represented are Anna's (Calypte anna) and Allen's (Selasphorus sasin). We have lots of hanging flowers and pots of flowers scattered about the patio, and I think this helps draw the little fellows in too. I think they are truly one of my favorite little birds.

Speaking of hummingbirds -- I found a book yesterday in the bargain rack at Barnes & Noble (my favorite new book bookstore) that I am quite excited to read. For $5.98, I purchased a copy of A Summer of Hummingbirds: Love, Art, and Scandal in the Intersecting Worlds of Emily Dickinson, Mark Twain, Harriet Beecher Stowe, & Martin Johnson Heade, by Christopher Benfey. Dr. Benfey is a professor of English at Mount Holyoke College in South Hadley, Massachusetts. I am sure that most of you have heard of everyone in the title of the book but Martin Johnson Heade. Mr. Heade (1819-1904) was a painter of hummingbirds! 'Google' his name and treat yourself to some of the most exquisite paintings of plants and hummingbirds. He was also an artist of the "Hudson River School" (mid-19th century) with the likes of Thomas Moran, Thomas Cole, and Albert Bierstadt. I have posted one of Mr. Heade's beautiful paintings below, and you can 'click' on it to see it larger.

Finally, to conclude our little homage to our tiny energetic feathered friends, the hummingbirds; how about two poems from the 'Belle of Amherst' herself, Emily Dickinson --

Within my Garden, rides a Bird
Upon a single Wheel--
Whose spokes a dizzy Music make
As 'twere a traveling Mill--

He never stops, but slackens
Above the Ripest Rose-- 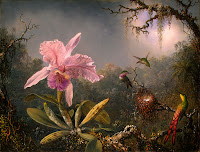 Partakes without alighting
And praises as he goes,

Till every spice is tasted--
And then his Fairy Gig
Reels in remoter atmospheres--
And I rejoin my Dog,

And He and I, perplex us
If positive, 'twere we--
Or bore the Garden in the Brain
This Curiosity--

But He, the best Logician,
Refers my clumsy eye--
To just vibrating Blossoms!
An Exquisite Reply!

A Route of Evanescence
With a revolving Wheel--
A Resonance of Emerald--
A Rush of Cochineal--
And every Blossom on the Bush
Adjusts its tumbled Head--
The mail from Tunis, probably,
An easy Morning's Ride--

Posted by Christopher at 2:47 PM